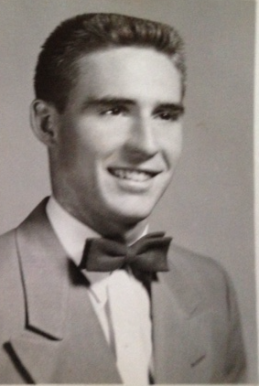 He could fix any car of any make of any malady. If the water had fish in it, he’d catch them. In his younger days, he’d stay up Saturday night drinking adult beverages. Sunday afternoon, he’d float his knuckle ball past you, then rip your curve into the left field corner for a double. He was my brother, four years my senior. He was my first hero. He called me Little Sister. I often called him, Trees.

He was born and raised in the Missouri Ozarks, miles from any town. When not yet fourteen, in 1951, our Dad’s stroke hit in the middle of a winter storm that turned small creeks turned into roaring rivers, washed out roads and turned pastures into quagmires, followed by three days of snow. Somehow, with the help of two neighbors, Forrest got Dad to a hospital, thirty miles away.

Dad’s stroke changed our family. Forrest went to live with a sister in Kansas. I stayed in Missouri. He became the first in our family to graduate high school and joined the Marines. Back in Kansas, he fell in love, got married and became a fireman. Soon after, he was blessed with a daughter and two sons. When his marriage soured, he stayed a month or three with me and my family. My consulting work took me to California. Forrest moved to Iowa, remarried and became a foreman for an asbestos removal firm.

In July 2004, my son, Matt, out of college two years, joined me on a fishing trip with Uncle Forrest. It was a jolt to me that Forrest used a cane. “Problem with my circulation,” was his explanation. He built a fire on the lake’s bank and fried our catch almost as fast as we pulled them in. “Just like we was boys, livin’ with Dad, after Mom died,” he laughed.

His brown eyes flashed when Matt landed another perch or bluegill. “Come live with me, Boy. We’ll fish ever day.”

I’d always phoned him, or sent a thank you card, on the anniversary of Dad’s stroke, yet I was a bit surprised when he called in the Spring of 2007. “The owner where I work kicked the bucket. His wife inherited it, kitten and caboodle. She’s green as owl shit when it comes to business. I said you’d help. Come out. We’ll go fishin’.”

I stayed in a motel in Muscatine and installed an accounting and tracking system for the lady that ran her company. The fish didn’t bite that week, though.

A few months later, another call. “The lady wants me to buy her out. No down. Just a monthly payment for six years. Whatcha think?”

“Can you afford it?”

“Ten grand a month? No problem.”

“That what you want?”

“I can build sales goin’ after older hospitals and schools. They was built with asbestos. Agree?”

“Do what you think’s best.”

On my anniversary call, he said, “I’m makin’ a shit pot full of money, Little Sister. Like we thought, schools and hospitals are good clients.”

September, 2008, he had a different request. “The mob’s after my business. I need ya to negotiate with ‘em.”

“How’d you get involved with them?”

“I ain’t. Might be Chinese. Whichever, a feller walks in with a satchel of cash and says, ‘I’m here to buy ya out.’ They’re partial to trash and garbage companies. Vending machine dealers. Reckon that’s how they hide drug money. They laid five mil, cash on my desk. Think I can get more?”

“If it’s the syndicate, you can’t negotiate.”

I recruited Matt, an ad agency VP by then, to ride shot gun. In Muscatine, Forrest greeted us at his house in a walker. “Legs are no better.” If he wasn’t worried, why should I?

We met the buyer’s representative in a local bank boardroom. He was professional and polite. We went over Forrest’s financials. Yes, our offer included rolling stock. Yes, the only debt was two equipment loans. Yes, my Power of Attorney gave me the ability to sell. Yes, Matt and I served pro bono. A wire transfer deposited almost 6 million into Forrest’s account. On our way to the airport, Matt said, “Wish you were my brother, Little Sister.”

“You know sawbones. Somethin’ different ever visit. Yet send ya a big bill. I’m thinkin’ about buyin’ a Lexus. What’d ya drive?”

Hit too close to home, huh? Fine. Still, I didn’t expect the call that came a few weeks later. “Where ya been? I called twice.”

“We went skiing.” I notice my message light blinks.

“You should know. You’re the one with the bread.”

He turns serious. “Get yer ass out here, Little Sister. They’re cuttin’ off my leg.”

“It’ll be Thursday before I’m there.”

“It’ll be gone by then, but come anyway.”

He coughed. Hard. Janet, his wife, took the phone. “It’s been bad,” she says. There are tears in her voice.

Janet met me in the hospital waiting room. “He’s weaker every day. Has a stupid thing about his shoe. Right foot. The one they cut off. Won’t let it go. He slurs so, I can’t understand half of what he says.”

Her body trembles at my hug. Gray roots show in her black hair. Her finger nails are ragged. “They want to take his other leg next week.”

I sit in a folding chair next to Forrest’s bed. When Janet goes for coffee, he pulls me close. He smells like fish sticks. He shoves a dirty tennis shoe at me. Clear as a TV announcer he says, “Read my shoe. Bank account numbers. Stuff you’ll need when I’m gone.”

In the shoe’s lining is a 3×5 card, listing bank information. Everything seems in order when I review his documents. His sons are his main beneficiaries. No mention of Janet or his daughter. An envelope has, “Open When I Die” scrawled across it.

Back in his room, I say, “I’ve a problem with your will. Why cut Janet and Sandy out?”

“After what they done to me?”

“Everyone’s entitled to their opinion. Mine is, now’s not the time for pride. Now’s the time to forgive and forget.”

The room goes quiet. The elevator down the hall throbs to a stop. A meal cart chatters by.

Forrest turns to me. Tears run down his face. There’s no slur to his voice. “Okay, Little Sister, do it yer way.” He signed the codicil that afternoon.

Back home, calls to Janet start and end in tears. The week before Christmas, 2015, her daughter says, “Forrest, died 40 minutes ago. Can you come?”

On the plane I open the “When I Die” envelope. It shows a safety deposit box number and pass word. After his funeral, I visit the bank. In the box is a picture of Dad and I in front of the house we lived in before Dad’s illness, 12 pocket watches and 14 wrist watches, all well-known brands. And, $20,000 cash.

In a letter addressed to Pete, not Little Sister: “You were a good brother. Dad’s stroke made us what we are. Hope I go easier than him. You too. Have a watch for your trouble. Sell the others.”

Pete Peterson could hit neither the fast ball nor the curve, thus he changed his career trajectory from baseball’s Hall of Fame to something easy like becoming a famous writer. His fiction has appeared, or will appear, in Dead Mule School of Literature, Stone Slide Corrective, Planters and Gatherers, The Hunter’s Horn, Red Ranger, and Leatherneck. He’s a 2015 finalist in the William Faulkner Foundation Writer’s Competition.