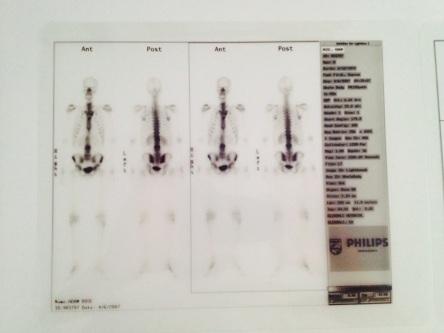 It’s been two days since my third round of chemotherapy. I needed two Ativan on my way to treatment in hopes that they would keep me calm enough for Roxanne and Mark to insert the tube into a vein. Turns out it was a two person job even with the dopey drug running through my system. The Ativan made my body slow down and my mind fuzz over like frost on a windshield. I squeezed Mark’s hand to pump up the reluctant vessels while focusing on the painting of a rodeo clown leaping over a bull. Roxanne struggled to find a vein that was relaxed enough for the needle.

Mark distracted me with a story of his time on Jeopardy!. He won forty thousand dollars, and afterwards decided he had enough of life as a lawyer. He returned to school and became a nurse. Mark was in his early fifties; he had a dyed beard and curly brown hair. He always knew exactly what to say to mom and Beatrice when they sat at the foot of my bed during the injections. He charmed them with anecdotes involving his time spent in Germany and England. The poisons rushed through my body as they listened to stories about room temperature cask-conditioned beers served with the perfect amount of foam.

My oncologist, Dr. Fisher, was not going to be seeing us for the fourth round. Paige, the nurse practitioner, was to hold our meeting before treatment started. I joked with Beatrice, saying that Paige could be her “sister” wife if we lived in Utah and practiced polygamy (we were on a major Big Love kick at the time). Paige reminded me of Parker Posey. She wore open toed shoes with silver rings on the middle toes. When we weren’t focused on the business of cancer, she would say how jealous she was of our past in southern California.

She looked straight at the computer screen, and in a medically monotone manner said I had tumors in more places than the L-3 vertebrate. There were “trouble spots” in my ribs, further up the spine, and on one of my hips. I didn’t want to know where anything else was–it did me no good knowing where every fucking “trouble spot” was located. It felt like someone giving me the location of every landmine buried in an open field while being plunked down in the center.

Round four began. It was time to commence treatment with mom and Beatrice hanging with their Cosmos and Vogues. Mark injected the first and only red colored chemical into my body. It was thicker than Jell-O as it plunged into my arm. I felt a light burn rush up my forearm, but this one was nowhere near as bad as the last of the four. ABVD are the initials of the four different chemical cocktails pumped into my body every two weeks. The D is the last and takes the longest because of how much it hurts going in. They have it an ominous dark colored bag because it hates direct sunlight. Mark laid a bag of ice on my arm to settle the flare up of red veins mapping out the constellation of my cardiovascular system. I clenched my jaw as tears blurred Beatrice into a blonde watercolor.

Tuesday night I felt horrible: emotionally, physically, mentally wasted. I could barely move. It was a challenge eating dinner, Mom’s chicken and dumplings. I took an early evening nap that had me sweating uncontrollably. The smell of toxins rising from my pores while my intestines twisted into violent knots prevented any sound slumber. Later, I found myself inconsolably weeping in my wife’s arms. Beatrice reminded me that Mark warned us about the steroid pill. He said it might make me extremely emotional for a while. I went back to bed at quarter of seven. I had the most vivid dreams of the chemo endowing me with multiple super-powered abilities — super strength, teleportation, invulnerability, ESP, and something akin to the Force — but the powers all came and went one after the other. The cancer stayed.

Wednesday morning came and I woke with major stomach cramps and a feeling of being hit by a semi- truck. The nausea was coming in waves and the waves became worse and worse throughout the day. The highlight of the day was hitting Bedrock Comics and picking up a decent haul of books for myself. I was able to hold down a turkey sub after that, but later suffered with more nausea and severe acid reflux. My face became inexplicably flushed thus freaking Beatrice out enough to call Mark at the treatment center. He said as along as I wasn’t having any major shortness of breath then everything was okay.

Thursday rounded the corner and last night was rough. My folks acted like I was already out of the woods, but I knew I was still deep in the forest with a dull machete. I didn’t want to be a downer so I tried not to remind them that things were not okay. My mom “joked” with me that morning about sleeping in till nine. I knew it was a joke but I was frustrated- I didn’t want to be a patient anymore- I wanted to feel healthy more than anything. I was tired of feeling like shit and the fracture in my lower back was a constant reminder of all the baloney I was forced to deal with. Everybody around me was healthy and I was not- I wanted my life back. I was terrified.

Beatrice went to the emergency room without me Friday afternoon because of a tingling numbness in her right cheek and hand. She had called for a doctor’s appointment, and they could not see her for two weeks. They suggested she go to the ER immediately to play it safe. Beatrice insisted I stay home and treat it like a routine doctor’s appointment. I felt like a shitty husband. Rationally I knew she had a point when taking my back pain into account, but I despised not doing the right thing in this scenario.

The day was already hectic to begin with. Duck eggs nestled next to the pool hatched so we spent the early afternoon scooping baby ducklings out of the pool with a pool skimmer and placing them in a kiddie pool until we collected them all. Eight of the nine ducklings made it safely under the fence and down to the pond with their mama duck. One of them seemed to have suffered an injury in the transfer and didn’t look like it could walk. I already rescued one wayward duckling a second time from the confines of the pool. He was compelled to return to the chlorine; his egg must have been closest to the edge of the pool. Hopefully they all live happily by the pond behind the fence. We intended to check on them when Beatrice returned. I hoped it was carpal tunnel or some simple non-threatening explanation for her numbness. She called and said they wanted to give her a CAT scan. I’d already experienced a CAT scan, PET scan, bone scan, X-ray, MRI, and would spend the final month of treatment being bombarded with radiation on a daily basis. Geiger counters loved me, and I didn’t want them to know Beatrice existed.

The following poem may or may not depict the aforementioned rounds of chemotherapy:

Nurse Mark sets the brochure for cyborgs on my lap:

Insert a port between the patient’s shoulder and neck,

Creating a direct line to the river vein.

He plunges the syringe filled with red Jell-O

Into my right arm until the veins glow,

And I think of the games children play,

Raking the soil of the skin until

My eyes water. My Mother and newlywed bride

Look away and read Time.

He says some veins have collapsed,

And I think of children trapped in a burning house.

An ice pack masks the pain,

And I still refuse the port.

The chemo moves on to the “vampire bag”

I grind my teeth for hours, my bones ache, my muscles wail,

And stinking of chemicals.

The steroids arrive in pill form.

Side effects include an overwhelming

Two weeks till round four of twelve.

I lie in bed with my wife

And we see the beach.

Our children run from the waves

And into the arms of their mother.

The three of them

And I am not there.

Adam Rose lives in Los Angeles with his amazing wife and two children. He’s been in remission for six years. He’s currently working on a recently finished novel as well as a soon to be released All Ages graphic novel.