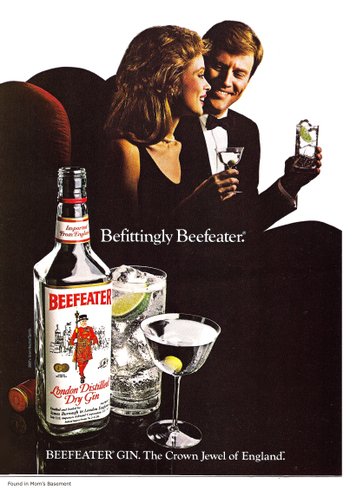 “What did you do to earn your Beefeaters today?”  The gin ad kept running through my mind.  I couldn’t make it stop.

I pushed the heavily laden canoe into the teeth of the wind up a forgotten arm of Trout Lake in Northern Manitoba.  To pause and breathe meant to lose distance paid for in pain.  This series of small lakes and portages between Southern Indian Lake and the South Seal River could break me.  On the lee side of my shirt mosquitoes crawled bug on bug so thick I wouldn’t know its color if I couldn’t say from memory.  I almost never found the portages where the old map indicated. Two-hundred-foot contour intervals hid heartbreaking hills.  With the canoe on my shoulders, I walked up hills so steep the bow touched the dirt rising in front of me.  Camp tonight would be another bug hole in unbroken bush.

The water in this arm of Trout Lake had so little depth I abraded the bottom of the paddle on the rocks.  With each push, I recited the caption of the ad, “What did you do to earn your Beefeaters today?”  The ad, a black and white photograph showed a man and a woman across from each other in an intimate booth, martini glasses between them, knees grazed.  Memory of the photograph, reminded of what never was, and was too late to ever be.

Another heartbreaking push with the paddle, there would be no Beefeaters tonight, and no young woman’s admiring gaze.

The man in the ad was everything I was not, groomed, the kind of body a model acquired from good diet and hours in a gym.  His perfect complexion lacked the marks this country would leave.  His look showed the confidence of a man who had seen too little.  Her look overwhelmed any stoicism I might want to pretend to in my harshest moments: perfect shining dark hair, short pencil skirt, heels, and that expression, a combination of adoration and mystery, the memorable look differentiating the classic beauty from one more healthy young woman.  Words rarely find it, but a man knows.

I hated the man in the ad for what he was, and I was not.

Knowing helped nothing.  What I loved was not the young woman, but the vision of the artist, the photographer who manipulated light and pose.  Chances were, he was short, fat, cynical, altogether a person to avoid.  Hell, maybe the woman whose pose he directed for the picture did nothing for him.  Didn’t matter.  He had the power.  They always do.

David O. Selznik, Margaret Mitchell, and Vivian Leigh created Scarlet.  Homer created Helen, the face that launched a thousand ships.  The artists have always done it to the rest of us.  They always will.  The idea I might pit whatever decency, good sense, or sobriety I might acquire against the power of this art is another cruel joke.

The mosquito bites anesthetized my face.  When I touched my finger by accident to my cheek, the blood on my fingertips surprised me.

Edd B. Jennings runs beef cattle on the banks of the New River in the mountains of Virginia. Since spring of 2016, he has placed work with Trigger Warnings, The Scarlet Leaf Review, Flash Fiction Magazine, Jotters United, Bedford 87, Thread Magazine, Quail Bell, Roane Publishing, Sicklit, and Ginosko Literary Journal, and Quarterday.  His nonfiction Arctic
canoeing books and his novel, Under Poplar Camp Mountain, are with the Leslie E. Owen Agency.