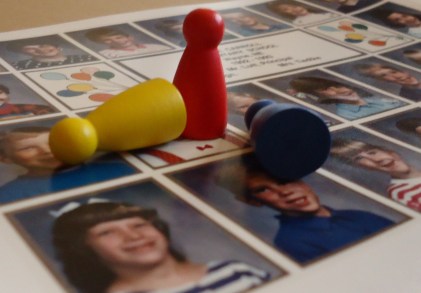 Christa sat in her wheelchair without clothes on, her large swollen body hunkered into a black wheelchair in the middle of the room. I looked at my twin sister, Sarah, and we each knew what the other was thinking: She’s naked.

My mother had called and set up a play date for my sister and me. We liked Christa; we loved Christa. She liked to dress-up and when we played house, she liked to be the pet dog, down on all fours and barking in the closet which served as her doghouse. Or we’d pull out our parents’ old trench coats from the costume trunk and play Mystery Club in our bedroom with an unplugged rotary phone and scratch paper to make plans and layouts of other rooms in the house. We had a stuffed animal sidekick, a dog name “Clue,” with a Sherlock Holmes hat on which we’d labeled his name with peeling paper stickers, the glue refusing to stick to the plaid material. We searched throughout the house for some sort of mystery—something out of whack. Once, Sarah, Christa, and I counted the jar of coins my brother had hidden in his closet. We put it back but each took a quarter as a fee for “solving” how much was in it. Christa was always on the same page as us, ready to uncover and unravel the next adventure.

But then something changed. I first noticed it one Sunday morning in church when I left for the bathroom as I always did during the sermon, the most boring part. I walked into a stall and sat there, my white tights around my knees, when I heard someone vomiting in the next stall. I sat for awhile longer, unmoved but cautious, until it didn’t stop. I went back and told my mom. I followed her and two other women back to the bathroom, but I hid behind the wall as I heard them talking. There I learned it was Christa. One woman said to me with a pitiful look, “Christa’s sick.”

Christa stopped going to our school when the cancer in her brain came back a second or third time. I remember seeing her at the swimming pool one summer in between one of the relapses. It was really cold that day, and everyone was leaving at the same time. Our mother stood behind us as we talked to her in the women’s locker room. As she talked about whatever first-graders who are going to be second-graders talk about, she peeled off her swimsuit and stood completely naked in front of us. I had never seen anyone naked besides myself and my sister, and it was scary. She was extremely thin. She put her clothes on as she talked, her mouth never breaking its smile, her eyes never leaving our blanched faces.

Several months later, she was swollen from chemotherapy and as her health worsened, clothes became a nuisance. This was unnatural to me; people wear clothes around other people. I remember thinking that it was the cancer that made her gain weight to four times her previous size and felt extremely stupid when some adult corrected me and said it was her body’s reaction to the chemo treatment. By this time she was going to school in a town twenty minutes away where her mother taught music. That way they could be together if something happened. In her absence, her body had changed so drastically that no one except for Sarah and me recognized her picture on the Sunday schoolroom wall.

On the particular visit when we visited Christa at her home, we brought tracings of Disney characters. She and her family were given money to go to Disneyworld, and so Sarah and I decided to trace pictures for her of Mickey Mouse, Donald Duck, and Goofy. We had traced them because we were given a Disney character drawing set for our birthday, and we had wanted them to look nice. We had colored them in and outlined them in thick, black permanent marker. While following the black outline, I had been proud of my handiwork. Clutching the pieces of paper in my hands, my mother followed us into the living room, pushing on our backs as we slowly walked up the stairs and then leaving us there alone. I slid my tracing across the table attached to Christa’s chair and tried to watch her eyes above her enormously swollen cheeks. I can’t imagine her face anymore as it once was in my bedroom, as she barked happily and sat on her haunches, her front paws in the air.

She was so excited about the pictures, she yelled for her mom, Colleen, to come look at them.

“Look at what Rachel and Sarah drew!” she said.

Her mother proceeded to compliment our artwork. We were avid drawers, lying in front of the television for hours, sketching with markers and colored pencils and paints. I wrote stories, drawing illustrations for each page. I dreamed I would be an artist someday

“We traced them,” Sarah said quietly. I nodded, embarrassed, but I don’t think either of them heard us.

We sat in silence for awhile, waiting for her mother to bring us Kraft macaroni and cheese and hotdogs. Colleen sat and helped Christa eat while we watch television. Sarah and I sat on either side of her, flanking her like bookends, and it was hard to come up with things to talk about when we couldn’t see each other to read the other’s expression. We watched more television until we finished eating. Colleen brought out some board games. I was disappointed. Watching T.V. felt easier.

I don’t remember all the games we played or what we talked about, but I do know we ended up playing the game of Clue for several hours into the late afternoon and evening. For this game, Christa was Miss Scarlet. Sarah was probably Mrs. Peacock since she was going through a “blue” phase, and I chose Colonel Mustard. I liked his name; it was pungent and strong.

We selected cards from the pile and took turns showing one another any card we had to prove our conjectures as defunct. I liked checking each item off the list. The three cards of truth were hidden away in the small manila envelope in the middle of the game board. There was a real mystery here even though it was a game. I could reach out and find out what the problem was, but instead I made small dark x’s in the box next to the name of each weapon, room, or person that I saw.

The game lasted forever. When my mom arrived, I didn’t want to say I was tired of Clue, so I decided to guess at the mystery of the game. It was a premature guess. There were several options left on my list of objects, rooms, and people. Part of me wanted to show off for everyone, to show that I can solve an actual mystery; part of me wished to be done with the game. I guessed the weapon and the murderer—me, Colonel Mustard—but I incorrectly guess the room where Mr. Body was killed. I happily put the cards back in the tiny manila envelope and sat on the couch alone, watching Colleen and my mom talk.

Before Christa dies, the pastor at our church tells my mom that Christa and he talked about what would happen to her—she knew where she was going and what death meant. When I heard this, it frightened me. How could she possibly know? How did she know at eight years old what was going to happen to her? We all had mysteries inside of us.

Christa died one night in her parents’ bed not especially long after our visit. Sarah and I didn’t go to the funeral, didn’t want to see our friend in the casket, her body go into the cold ground.

I often lay awake at night wondering what it feels like to never be gone, to live forever in the sky. Something about my mind always thinking—forever and ever—made me feel a hole in my chest. I pressed my eyes into my pillow and waited until I saw stars streaming behind my closed eyelids.

I imagine death is like this, running through stars.

Rachel Hruza has an MA in creative writing from the University of Nebraska-Lincoln. She has been published in South Dakota Magazine, AnotherRealm, and Scintilla. She also runs the writing center at Central Community College in Grand Island, Nebraska, where she lives with her husband and curly-haired peekapoo.