I sat there in the partial shade, under the palm tree, thinking, dozing a bit, watching the birds and hearing the hawk across the wash calling out plaintively, as my daughter (the one with red hair) came out of the house, crossed the lawn and said Dad, it’s time you came in for lunch now. My son-in-law and I had wondered why the hawk was crying, and we thought it might be that a chick had fallen from the nest.

Maybe just a few minutes more, I said. I’m remembering so many things, good and bad, from the past. That’s all old people have to think about, they have no future, only the past and the present.

I think so much now of the past, of being a dumb kid growing up, thinking I knew it all, and later in life, knowing I knew so little. I remember high school and then college. It was in college that I met that girl, the one that stuck with me through thick and thin, good and bad, for over 70 years. I remember our first kiss, and how my heart thumped in my chest. And I remember the last time I kissed her as she lay dying from a stroke, unresponsive and unknowing, and I told her that I loved her and I would always be there for her.

“Mary, outside the first little home we bought.”

There are all the memories of our first years together, of first jobs and first paychecks. Then of leaving to go into the army, of getting leave to come home after finishing OCS, now an officer and a gentleman, and how that second baby, a daughter (the one with the auburn hair) cried all night long because there was a strange man in the house. Then overseas, to England, across the Channel to France and on into Germany, and how the letters from home almost never caught up with us.

At war’s end I remember being glad to see the sight of America again. And there were ten million of us, trained to be soldiers, un-needed now, and no civilian jobs for us.

But I did find a job, and we moved out of the little rented house and bought one, unfinished but livable, on a half-acre. That girl, now a woman with two children, said of the little house and the half acre, you can plant a lawn over there, and some fruit trees over there, and a vegetable garden over here, and I’ll make curtains for these windows, and then, later, we can add two more bedrooms and another bath. 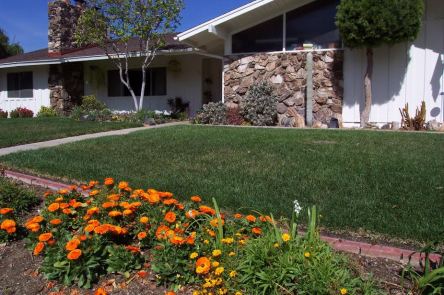 “The home we left behind”

We did all those things, and another baby boy came along and a baby girl (the one with the red hair) and then another baby boy. I got a job, and I learned to be an accounting clerk, and a shipping clerk, and an order filler, and a warehouseman, and a seed packet filler, and then a plant superintendent, and a branch manager, and after many years, a vice president and western regional manager. The girl, now a grown woman, kept the house, made the meals, raised the children, made do when the wages were small, and better when the salary became good. And we did build those other bedrooms and another bath, and the garden produced, and the fruit trees bore fruit, and the kids went to school, and grew up and went to college, and went on with their own lives.

Our town grew, and our little half acre became part of a desirable property for an auto sales establishment, and we sold it for much more than we paid for it. We bought a bigger, newer home– palatial to us, in a new, upscale part of town, now with only three of the children (including the girl with the red hair) still with us.

The woman went back to college and got her degree in music so she could become a piano teacher. And she said she would be happy if she got two or three students, but at peak she had over 30 students and was teaching every afternoon, six days a week, and sometimes makeup lessons on Sunday.

I remember too, our days of camping, first with a couple of shelter-halves I had from the army, then with a small tent, then with a bigger tent. Then as the children began to leave home, camping in our first motorhome, finally coming down to a fitted van that had all the amenities, when no one but the last child was left at home.

I remember the children in school, in high school then in college, then little by little getting married and presenting us with grandchildren, Tom, David, then the girl with the auburn hair producing Brian, Cathy, Jenny, David, and finally the youngest coming up with Emma and Isaac, and then great–grandchildren began to arrive as the woman and I grew older and older.

I think of memories of retiring, of suddenly realizing that I no longer needed to get up at six am each day, do my morning run, and after a shower, eating breakfast with that lady and then my daily commute to the job. Retirement took some getting used to, but I soon settled in to a routine. I sometimes got breakfast for the woman, planned on gardening chores, and I started to write again, with some success, and I got dinner so the woman could sit down to eat as she finished with her last student.

We would talk about our day, and she would tell me about her last student and how good he was, and how bad another one was, he just won’t count, she said. We discussed upcoming joint projects, and trips we might make in our RV, since I was now writing a camping column for newspapers. And we planned our trips to England, to Ireland, to France, to Germany and to Italy, and a couple of trips we finally made to Hawaii.

I recalled that the house didn’t really seem empty after all the children were gone. They stayed in touch, wrote letters, and enclosed pictures at first, then emails and attached pictures.

I don’t remember death ever entering my mind, but the woman, I think, knew her health was failing and that her time might be coming to a close, and it was.

I remember on a Sunday after returning from a camping trip she said she hadn’t slept well and her stomach was upset. Around midnight, as we lay sleeping, I heard her mumble something, and I woke up and asked her what was wrong, and she said I’ve had a stroke, I can’t move my left leg or left arm. Now began a routine of many trips, in and out of hospitals, to doctors, in and out of rehabilitation facilities, to using wheelchairs and an arm crutch, of a parade of caregivers, some good, some not, who spelled me as the primary caregiver.

After a year or so, I remember the two daughters said you have to move closer to one of us so we can help. So we did, and bought a small house in a retirement center, and I can remember how sad it was to leave the home we loved, our many friends and neighbors, to live in another place, close to a daughter (the one with the red hair). I remember a new set of doctors, hospitals, nurses, and rehab facilities nearby, and a new set of caregivers. I remember the many trips to the hospital when my wife fell and broke her hip, and then a careless caregiver let her fall and she broke five ribs. There are memories of the woman slowly losing touch with life, of a last visit to the rehab center by our oldest daughter (the one with the auburn hair) and her husband, and that she cried as she called me to say they were on their way home, and that her Mom hadn’t been responsive, and didn’t seem to know they were there.

I remember the phone call that day from the facility and the nurse said she died today at 12:30 pm, and I’m so sorry. And I was sad too. The great love of my life was gone. I cried, and a little of me died that day, too.

Now I am an old man waiting for my last day to come, living with a daughter (the one with the red hair) and her husband, both of them very kind to me. They feed me and house me, and I feel grateful to them, but sad.

As I sit there under the palm tree, I hear again the plaintive cry of the hawk in the oak trees nearby, and my daughter says, Dad, it’s time for your lunch, and she helps me up off the blue outdoor chair and holds my hand as we walk across the lawn.