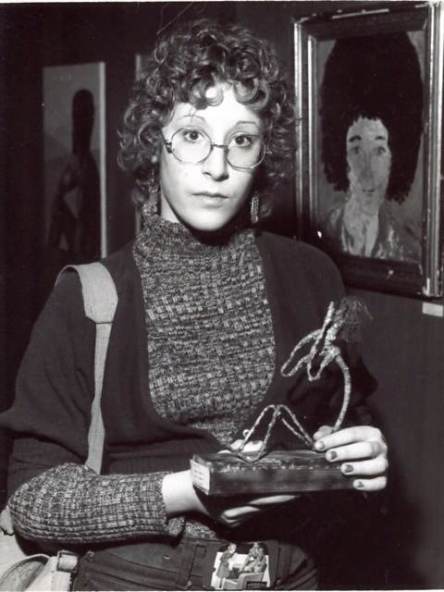 The author circa 1972, five months prior to the events of the story.

A girl’s first time should be memorable.

I gave my virginity away one bright July afternoon in 1972, and I remember my white and black polka dot bikini, the sun looking for all it was worth more like an enormous hot pearl than a distant star, sands like tea-stained lace laid out to dry, and ocean breezes. Flat on my back, in the dunes behind the backstop of the softball field wedged between parking field two and parking field three, I could see part of the red brick building that housed the public bathrooms, the top five or six feet of the chain link backstop, and an endless expanse of white-blue sky. It was the kind of view one would have were one buried neck deep in sand.

I remember thinking, afterwards, that a towel wouldn’t have been a bad idea, what with the salted breezes getting the warm sand in places sand really oughtn’t be. And honestly, sunglasses would’ve been smart, with all this laying on one’s back staring directly into the blinding white sun. And maybe sun block for my parts that’d never actually seen the sun before. Or even a bit of Coppertone®, since—if one is to give any credence at all to their logo—it was made specifically for young girls who’re having their bottoms yanked off in public, albeit by playful dogs, not a teenaged boy from Corona, Queens whose face I will forget.

Jodi Sh. Doff is a New York based writer and photographer. Her work has appeared in thefix.com, xoJane, Penthouse, Cosmopolitan, Bust Magazine, and The Olive Tree Review, and anthologized in Bearing Life;Best American Erotica; The Bust Guide To A New Girl Order; and Hos, Hookers, Callgirls & Rentboys. She received her MFA from Lesley University where she advises a graduate seminar in the art of memoir, and is a mentor with the PEN America Prison Writing Program.

The buses are late. The children play out in front of the school waiting for them. Hot. Humid. Sticky sweat. She’s ten. Almost eleven. Talking with her girl friends out on the grass.

The boys are running around. Tackling each other. Yelling over the girls’ heads. The girls sneak glances at them. Curious. What’s it like to be a boy?

The boys run circles around the girls now. Her chest tightens. The girls giggle. One girl, Heather: “Thomas, don’t you have anything better to do?” Thomas ignores her. Heather lets out a huff and rolls her eyes.

Eric Esposito has joined in now. They throw a hacky sack to each other as they run. Jamal Wooley and other boys run into the circle. The boys are smiling, winking at each other. Laughing.

Katie Staton: “Quit it! We’re trying to talk, Eric!” She tries to run after him, but he is too quick.

She says nothing. Crossing her arms over her full breasts. Maybe the buses will come. She looks up the road.

Then, Jamal Wooley reaches his hand out as he circles around the girls. And grabs her.

This is why she stopped wearing skirts with only her white thin cotton panties to block her skin, her newly blossomed pussy, from their hands, dirt under the nails. With jeans, the boys can’t touch her bare ass. With jeans and baggy shirts, she can pretend.

The boys laugh and run away. Eric and Thomas and the other boys shove Jamal. A congratulatory tussle.

The girls turn away from her. They have something very important to talk about now. She is not allowed to listen.

She speaks, “I hate when they do that.”

“Shut up. You know you like all that attention,” Katie rolls her eyes.

They go back to their girl chatter. They’re planning a sleepover for the weekend.

“I don’t know if you can come anymore. It might be too many people over anyway,” Heather says to her.

This is the way it is. In two days time, the girls will forget and accept her back, but now, they are angry. None of the girls know why they hate her, but they do.

She sees the vice principal standing, hands on hips, eyes squinting, waiting for the late buses.

He looks down at her. “What was that?”

“The boys. Jamaal Wooley. This time. He grabbed my butt.” Her voice is soft. A whisper.

The vice principal laughs. Throws his head back in an open mouthed chuckle. “That’s not something to bother me about, okay?”

She walks away still hearing his laughter. Still seeing the sun reflecting off his glasses. His open gaping mouth.

She waits for the buses.

Imee Cuison is a freelance writer based in Charleston, SC and Brooklyn, NY. She is the creative executive for Intrinsic Value Films, an independent film production company. Her prose and poetry work have appeared in numerous literary journals and anthologies such as Maganda Magazine, Tayo Literary Magazine, and Phatitude Literary Magazine.