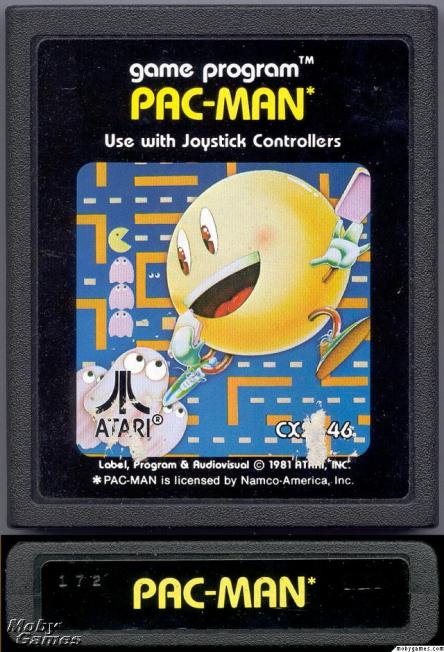 CES (Consumer Electronics Show) fervor started in October 1983.  For any consumer device-focused company, it was, and still is, the trade show of the year, conveniently scheduled at the beginning of January virtually guaranteeing ruined Christmas holidays for everyone involved.  Marketing and Sales were buzzing about Atari’s big introduction, the home console version of Pac-Man.  We were a research and development group and generally weren’t invited to attend the show, but it sounded so…huge…I asked my boss what I had to do to earn a ticket to go.

I called someone I knew who was a costume designer at Chuck E. Cheese restaurants. Singing rats, Pac-Man, what’s really the difference? I told her I’d pay her $500 (the amount in the petty cash box in our admin’s bottom drawer) to help me build life-size Pac-Man and Ghost costumes over the weekend. We constructed PVC frames laced with shoulder straps, and a giant foam and yellow fur cover for Pac-Man, red for the Ghost. Pac-Man’s mouth was hinged to open and close. On a cheap plastic Radio Shack audio box I recorded the “wakka, wakka, wakka” Pac-Man sound track using the arcade machine in the company’s game room. Monday morning, I hoisted the thing over my head, put on the furry yellow gloves, hit Play, and modeled the ensemble for my boss. For the next nine months, everything I did at the company had something to do with those damn costumes. 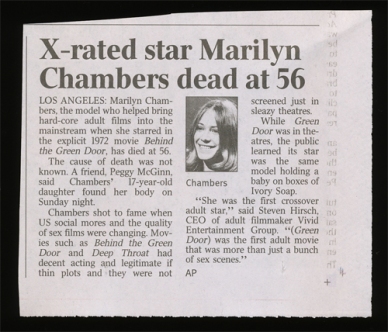 I had booth duty, clad in a Brooks Brother navy blazer and khaki skirt as required by Marketing. A  couple of local “dancers” that our trade show manager had found wore my much more fun costumes. Young, strong, free during the day, and probably happy to get some extra under-the-table cash, they did a great job.  At 5:00  all the show attendees headed off to fill the bars of Vegas, while I loaded up the costumes in a rental van and handed a sawbuck to a bellman to cart them up to my room at the MGM Grand (earning an “I Slept with Pac-Man” bumper sticker that mysteriously appeared on my Honda when I got home).

The third night of the show, around 2:00 AM, I was awakened by a call from my boss. “Frank Sinatra wants to meet Pac-Man.” Occasionally life throws you a sentence that you feel privileged to hear, and this was one of them. 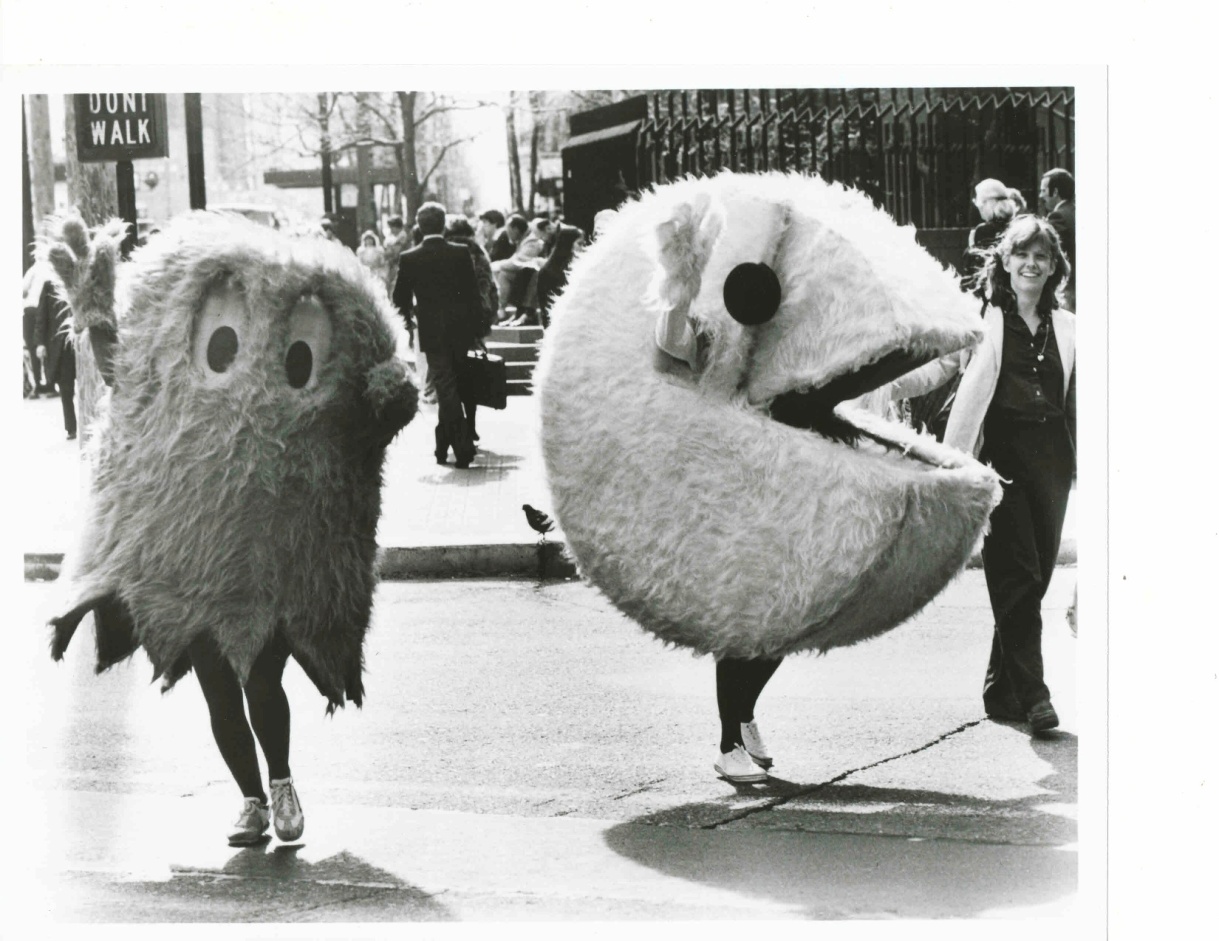 Harry came to my room and put on the yellow tights. Normally he was a give-credit-where-credit-is-due kind of manager and would always let me, the inventor, play the lead character.  But evidently when it came to meeting the Chairman of the Board, rank prevailed. 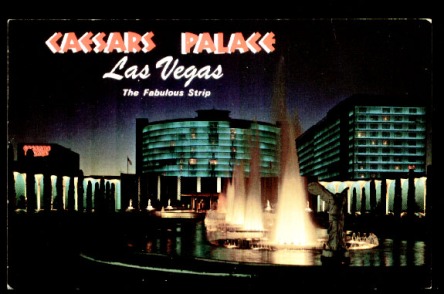 We walked across Las Vegas Boulevard to Caesar’s Palace where Frank had just finished up his last set of the night. Two men in black suits stood, hands behind their backs, on the sidewalk in front of the hotel. Greek gods sprayed pink and blue water behind them.

Since neither of us had a small of a back to lightly touch,  or even much in the way of arms, the men were forced to hold our big furry hands to lead us around the side of the hotel. Through Ghost’s eyeholes I saw corridor after corridor, linoleum, then garish casino carpet, then plush blue carpet as we wound through the bowels of the hotel. A set of double doors were opened for us and we entered a huge suite with a party underway. Glasses clinking, laughter, dim lighting – our path was suddenly blocked by more black suits. Then a face appeared at knee-level looking up my costume.

“Hey!  This one’s a girl!” I suddenly regretted not putting on a bra under my t-shirt. 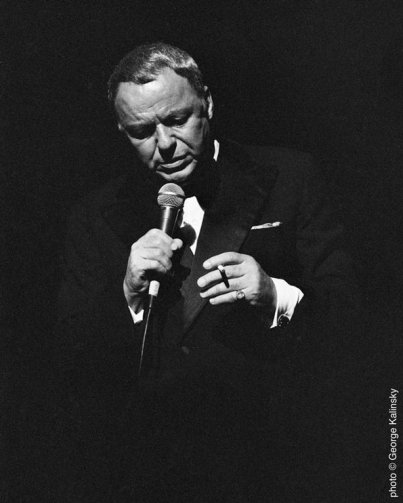 It was an unmistakable voice, followed by an unmistakable chuckle. I saw Frank get up from a sofa and take a couple of steps toward us, reaching out to shake Harry’s fuzzy hand.  Harry hit the Play button and the little Pac-Man theme song started. Huge laughs.

He never shook my hand, but then I was just playing the part of the lowly red sidekick. Frank didn’t get where he was by dealing with the guys one rung down.  It was okay. I was 22, had a photo of my boss in yellow tights just in case he didn’t give me a good annual review, and I was standing two feet from Frank Sinatra. Like all aging stars you see outside their airbrushed promotional images, Frank looked old. His hair and skin had thinned. The miles showed. Still he stood before me, blue eyes shining. I could hardly wait to tell my grandmother, the one who had taught me to sew.

The costumes arrived back at the office a week later with all the exhibit gear. They, and I, were shipped off to New York City the next day. Atari’s marketing department had decided to hold a National Pac Man Day in 22 cities all around the U.S. and wanted duplicate Pac Man and Ghost costumes made for each city’s event. I attended the one held in Salt Lake City and appeared on “Good Morning Salt Lake” to publicize the event with Pac Man by my side – fifteen minutes of fame that didn’t hold a candle to my five within that hotel suite.

Fifteen years later, when I heard that Frank Sinatra had died, I, and the rest of the world, thought back to moments we had shared with him. For me it wasn’t a first kiss to “Fly Me To The Moon”, or wedding dance to “The Way You Look Tonight”, it was his laugh, his eyes, and his hand shaking a fuzzy yellow glove I had sewn.

Shari Barnett is a native Californian (5th generation) who, after 30 years working in the Silicon Valley, moved to North Carolina to change careers and experience seasons. As she now watches her kids move past college and begin their careers, she can’t help but recall some of the crazy stuff that happened at the dawn of her own work life. This happened in 1983.