This summer, we’re yours for the reading! Click here for submission details. 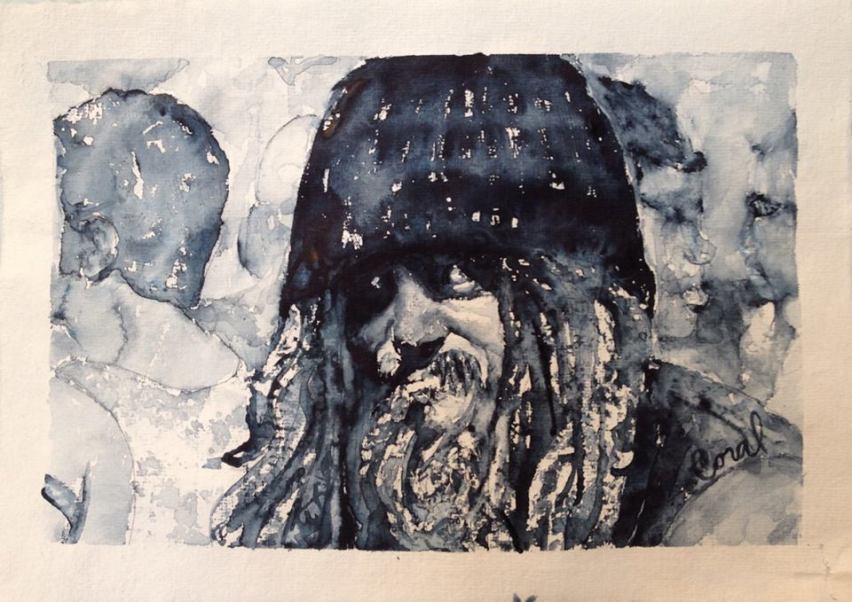 Image by Coral Staley
Based on the original photograph by Tala Brandeis http://www.rustrat.com/

After hitch-hiking to Washington D.C. for a protest I ended up living in the park across the street from the White House. It was a man named “Care Bear” who showed me the ins-and-outs of surviving in this D.C. park. Care Bear was a black man in his forties. He had a picture of his eight-year-old daughter that he would show to people. There was nothing significant about him as a homeless man, meaning he looked just as dirty and unapproachable as any picture of a random man who slept in the parks anywhere. He drank—a lot. He was filthy and carried all of his belongings in his broken down back-pack. He panhandled and wore shoes that had become asphalt black and were complemented with holes in strange places.

My relationship with Care Bear started with him offering to help me get some blankets for sleeping. What he called “blankets” were actually broken down cardboard boxes which we retrieved from nearby dumpsters. It was necessary to be quick before rats the size of cozy house cats came together and chased you out of their territory. Along with providing me with the blankets, he also showed me where the soup kitchen was and one of the places I could go to get clean, if I thought it necessary. There was a fountain in the park that some of the other homeless women would use as a bath late at night. I stopped cleaning myself even in the fountain when I noticed a dead bird floating in the water. A homeless person has got to have some standards.

In most of the big cities, restaurants would either refuse to let in the dirty, smelly people who wanted to use their bathrooms or would require a token, which one could only get by purchasing food. This made it hard to find a place to bathe and even harder to find a place to pee. Alleys usually worked fine, and I rarely gave it a second thought, though one of my friends had been raped while peeing in an alley in Texas.

It was not unusual for me to go three months without a bath or shower and I never brushed my teeth. When I think about it today, I get a glint of sad protectiveness for my teenage self, remembering that when I got my period each month, I would look for clothing on the side of the street, rip a square off, roll it up and find a private alley to deposit it as a tampon. At the time, it was the least of my worries, but today, I wish I could go back and give that girl a bath.

I have slept in the Lafayette Park across from the White House, Golden Gate Park and parks in Cleveland, Minneapolis and Milwaukee. When a park was not an option, there were always squats in the bigger cities. A squat in San Francisco on the corner of 4th and Folsom had once been a recording studio. Most of the remnants of this building’s music making days had been gutted out and replaced with all types of homeless people: old women who were batty or whose social security just didn’t cut it, Latino immigrants who had not yet found a community, addicts or alcoholics, and young runaways. Each homeless group had their room and it was the unspoken law of the street that you stayed in your part of the building. To aid me in my understanding, I had once ventured off into a section of the building that I hadn’t ever explored. I did not get too far in before I heard people behind me. Two men were waiting behind me with a knife pulled. I suppose when they saw my age and the fear in my eyes, they lost any idea of me as a threat, started laughing at how scared I was and walked away. As in most situations in my life, I was given that lesson very gently and I walked away unharmed. 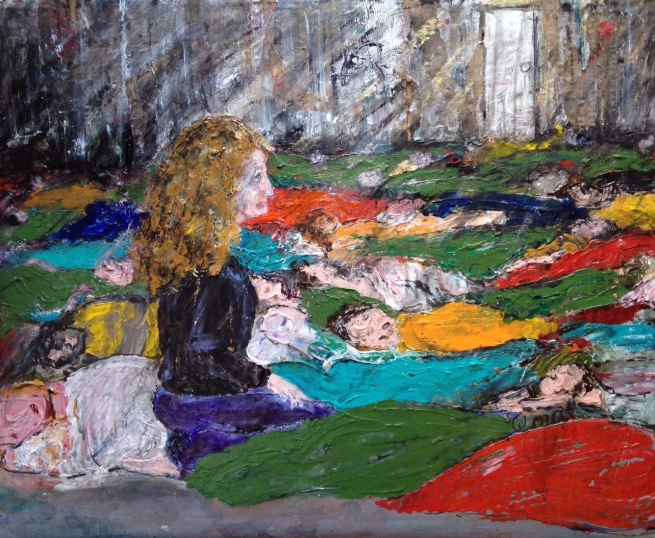 I belonged to the space full of runaways. We were all teenagers and had a room the size of my bedroom today, so full of young kids that after we all lay down to sleep at night  there was no empty space on the floor to walk. One night after all the floor was covered with horizontal dreamers, I realized I had to go pee—bad. I lay there, crossing my legs and visualizing an empty bladder, trying to make it till morning, but I had to go. This squat was not really an organized community, but we did have enough cooperation to have created a room whose sole purpose was to hold the defecation and urine of all the inhabitants. This is how we kept the squat livable.

I had to find my way to that “bathroom.” When I finally got up to make my way across the dark room, toward the door, I ended up stepping on a bunch of sleeping bodies. Groans and yells filled the darkness and my request for the people sleeping next to the door to move was met with a variety of curses. Dancing the pee dance, I managed to pull the door open and run to the “bathroom” to pee, with great relief.

Upon returning to the “teen room,” I could not push the door open and the bodies lying in front of the door had already made it clear that they were not getting up again. After having learned that the only rooms safe to me were the “teen room” and the “bathroom,” and knowing that the “teen room” was not an option, I returned to the space where I had just gotten so much relief.  I tiptoed around piles of crap all over the floor to a closet that was across the room, in the hopes that this one small area had not been disgraced, but even the closet floor was covered in shit.  I grabbed a grocery cart that was sitting outside the closet door and pulled it across the piles of crap into the closet, where I would be hidden away safely from other bathroom goers. I slept that night in the grocery cart, in a closet, safely three feet or so above poop.

I drive by abandoned buildings today and recognize the tale-tell signs of inhabitants.* I am amazed at the resourcefulness of some of the people who have found themselves on the streets.  If there ever is a worldwide disaster that leaves society without  modern day luxuries, it will be these homeless individuals who will be showing us where to find a blanket, a bathroom, and place to lay our heads.

*These include: plywood boards that are not completely nailed to the building (allowing a space for people to fit through), 5 gallon buckets  (used for toilets), tin cans or other signs of foods (that others might write off as garbage), and articles of clothing or blankets (that others might dismiss as rags, but are legitimately being used as clothes and blankets).

Anjila Joi Guadet is currently a Home Based Case Manager in the small town of New Albany, IN. She has an MA in Creative Writing and an MFA in Creative Nonfiction. One of her areas of interest when she was in school was the use of writing to work through traumatic experiences. She occasionally teaches journaling and memoir at local women’s homeless shelters in the hope of addressing some of that need in the community.