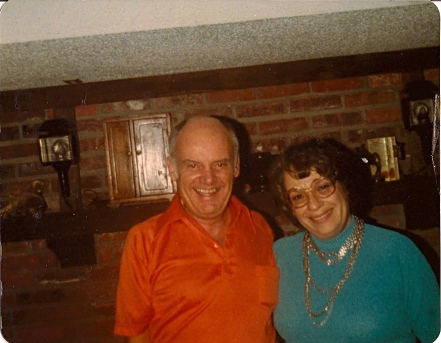 The author’s father and his wife Barb

In March, one day after her eighty-fourth birthday, Barb died. The following July, on what would have been Dad and Barb’s thirtieth anniversary, we gathered at the cemetery to celebrate her life and to bury her and my dad’s ashes, something we nine adult children wanted to do when Dad died fourteen years ago. I offered to officiate.

No, I’m not ordained. In my fifties I’m trying to be less aloof in my crazy big family. As a kid I learned to get along by being quiet. Now, I’m trying to speak up. And, I was worried my zealous sister, in the honeymoon stage of being a born again Christian, might try something funny—or not so funny. Recently she attended a funeral of someone she didn’t know because she felt God was calling her to raise people from the dead. I was pretty sure, since Dad and Barb were cremated, resurrection of their bodies on earth wouldn’t happen. Still, I wanted to make sure everything went smoothly and the ceremony reflected Barb’s beliefs. She was spiritual but not a churchgoer. We didn’t know how we’d pull off Barb’s wish to combine her ashes with Dad’s before inurnment. The cemetery manager, who stood upright in the back just outside the tent, made it clear, “You cannot blend their ashes.” We weren’t sure if this was a law or cemetery policy.

Thirty years ago, I didn’t want Mom and Dad to get divorced and I didn’t want to be a member of a crazy blended family. Both happened. Barb and Dad went to a Justice of the Peace then invited us to their celebration. My husband and I left home that morning driving under blue clear skies through the rolling green Flint Hills of Kansas. We drove into gray clouds and blinding rain just outside of Kansas City. When we arrived to the hotel where the wedding reception was being held, the severe weather sirens went off.

Dad was Barb’s third husband. I didn’t believe family rumors: Barb might be a serial husband killer and I knew she couldn’t be a “gold digger” because a divorced tool salesman and father of nine can’t be mined. Before Dad proposed to Barb he took her to meet my oldest sister. My sister drove the car out of the airport. All three sat in the front seat with Barb in the middle. “So what do you think of me?” Barb asked.

“At least you’re not an eighteen year old chick.” That was all the blessings Dad needed.

Barb wasn’t the cause of my parent’s divorce but her marrying Dad meant Mom and Dad’s marriage was over—for good. It took years for me to say, “My parents are divorced.” Just saying it meant I came from a broken home, added to my fear that my husband and I could break.

Outside the hotel the lightning cracked. Thunder boomed. So did Barb. When I arrived to the reception, I headed straight to the beverages. Barb sounded husky, Lauren Bacall-ish, but she looked—well, coarse black hair, colored, toothpick legs, and an impossible five months pregnant. She cackled—a lot. I sipped it all in until Barb’s eyes met mine. She swooped in. Slow, in a long drawn out way, she said, “J-u-l-i-e, I want you to call me Frother, a combination of friend and other mother.”

I called her Barb.

For sixteen years Dad made Barb laugh, something she needed. Once, over a cup of coffee, she told me about the baby who died one week after she gave birth. That same week her first husband walked out. After that, she wasn’t able to have children, worked in real estate and years later married a widower adopting his three children. He died. In her fifties, she met Dad. She cared for him, something he needed. He smoked and drank too much.

After years of threats Mom made Dad choose, “Drinking or us.”

He moved out. When Barb gave him the same ultimatum, shortly after they married, he chose Barb.

Holidays were never the same. No matter whose house we were at, we were all together “for the sake of the kids.” Mom, Dad, all us kids and our families, Barb, her adopted children and their families.

After Dad retired, he and Barb made gifts and furniture in their woodworking shop until Dad cut off three fingers. Barb had to bathe and dress him since he was partially paralyzed on one side from prior polio. Then his strokes started; eventually he couldn’t do yard work or travel. I tried to visit more. At their round oak table in a smoke cloud as we sipped bad coffee, Barb and I had lively conversations about books, politics, feminism, spirituality and whether God cared if people attended church. Dad slipped in, mostly one-liners like “It wasn’t the apple on the tree but the pair on the ground that caused the trouble in the garden,” or Larry Bruce’s “Everyday people are straying away from the Church and going back to God.”

Two months after Mom was diagnosed with a terminal illness, Dad died suddenly. Through our sadness, we joked, “Dad couldn’t stand mom beating him at anything.”

I’ll never forget that cold December day when I arrived to Kansas City hours too late. Entering the dim room, I kept my head down—everything was swirling tile specks, big black wheels. A ghostly white sheet was draped over the body on the silver gurney. I didn’t breathe until I looked fear in the eye. Peaceful. Without pain. Dad looked better dead than alive. I felt relieved for him, for me until guilt about feeling relieved seeped in. Dad died thinking he got away with smoking. He didn’t. Post mortem tests confirmed lung cancer.

Days later, we gathered at Barb’s house. With Dad’s ashes in an urn upon the dark oak mantel, we all sat around the pine tree and shared stories. It was like a big group therapy session. That year, Barb’s frequent winter blues turned into spring, summer and fall’s black grief. 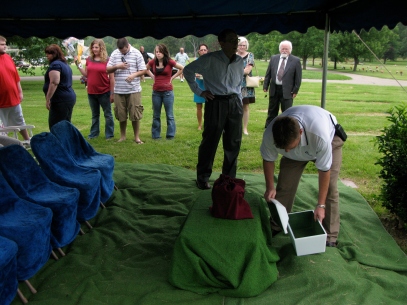 Mom reached out to Barb. Together, they worked with the hospital chaplain to create a warmer place for families to say goodbye to their loved ones before cremation. With memorial funds, an artist created a sculpture. At the dedication the following December, I gazed upon three sculpted angels. To me they were Mom, Dad, and Barb. 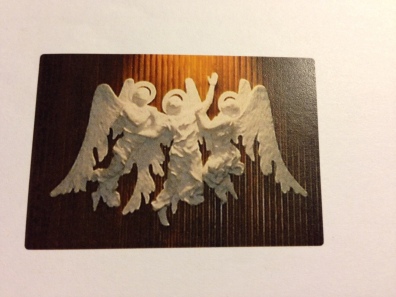 Barb and Mom started traveling together. When I proudly introduced them as, “My mom and my dad’s wife,” people looked at us funny.

Once I asked Mom, “How can you be friends with Barb?”

“I never stopped caring about your father. The drinking killed us, was killing him. I couldn’t take it anymore.” She stared out the window. “If Barb is what it took, she’s a gift.”

As Mom’s health declined, Barb helped to care for her. She even offered a place for Mom’s ashes in her family cemetery plot next to Barb’s mother, second husband, eventually Dad and Barb. On All Saints Day of 1999, Mom died. We had a big funeral dancing our way out of the church. Mom’s wishes. Her final Christmas letter (not the usual cheesy one) was read at the funeral “…I am entering into eternal life. This is not an occasion for sadness…” We cried anyway.

Before Mom’s inurnment, I suggested to Barb, “Maybe Dad’s ashes, which had been sitting upon the mantel for four years, should be inurned.”

That’s when she made her wishes known, “Over my dead body! He won’t go down until I do. He and your Mom might fool around.”

She slammed down her coffee mug and looked at me. “And when I die, mix our ashes together just to make sure.” 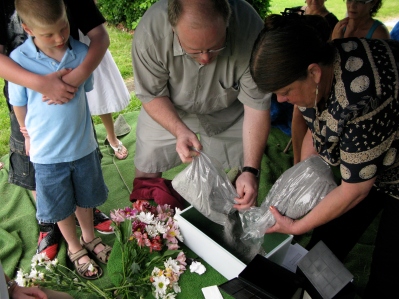 The spreading of ashes

At Mom’s inurnment my born again sister was still a zealous partier. She filled nine Glad bags, one for each kid, with Mom’s ashes. Maybe I should have taken one and scattered Mom over the sea, a place we shared many memorable times, but then it seemed too much like a nickel bag.

Barb came to family gatherings less and less after Mom’s death. Living miles away, I tried to keep in touch with her but she was pulling away. We didn’t know she was letting go of her life, refusing treatment for bladder cancer. The emails stopped, the answering machine was disconnected and the phone didn’t get answered. When I couldn’t bear being out of touch, I called one of her neighbors who told me Barb was often sitting in the garage in her fuzzy pink robe smoking. I sent letters and photos. She did not write back. Her adopted son moved in and was her full-time caregiver until she passed.

I expected everyone to be raw at the cemetery. Siblings threatened me by holding up iPhones with radar images of the approaching storm. I began with a poem from Rilke’s Love Poems to God, not the formal patriarchal, “Heavenly Father” opening. My born again sister, whom I love dearly asked, “When are we going to have the opening prayer?”

Doesn’t she know? The poem is prayer. I was getting peeved. She asked several times before, but didn’t ask again after my brother, an ordained minister read the Gospel. The Gospel saved my sister—from me. We sang. Terribly.

I looked at the cemetery manager. It was time to honor Barb’s wishes. Members of the self-appointed ash committee seized and opened the bags. Unsure of how to mix the two plastic bags of ashes and then fit them back into the two black metal containers, they argued. I’m often overwhelmed when we’re all together. This day was no different. Some siblings knelt before the ashes. Others, like me, looked on in awe. In that rare moment, I felt love—for each of my broken and blended family members. The rain and wind grew stronger.

In the storm of it all, ashes blew into dust.

Julie Gardner’s life work has been in early childhood education and counseling.  During the past seven years she took many writing courses, completed the Washington University Extension literary fiction certificate program, and trained to become certified as an Amherst Writers and Artists Affiliate.  She leads writing workshops and retreats in the Seattle area, some with homeless and formerly homeless women.  She is currently writing a memoir.