Editor’s note: Today’s story is a follow up to “Survival (Part I),” which we published on November 5th of this year. We have requested and received permission to reprint all of the correspondence in this story.

In the 18 months we’ve been on the internet Tell Us A Story has published stories both unusual and banal. Anjila Joi Guadet wrote about her experiences as a homeless teenager living on the streets of D.C. in “Squat” and Adam Rose told us what it was like to pump his body full of chemicals in “Treatment: Cycles Three & Four.” But a story need not include teenage runaways or cancer or the police to win a spot on our blog; we’ve also published far less sensational fare, like Allyson Wuerth’s sordid history with math or Jesse Millner’s simple, beautiful meditation on the small miracles of life. Mostly, we just want to hear about people’s lives and what sticks in their minds as a story worth telling, worth writing, and worth hearing. Some stories are too terrible to share while others are too wonderful not to. But, no matter the subject, we like to believe that all our stories are linked together by one thing: they are true.

Then, one fine day in September, we received a submission along with this email:

In the attached story, “Survival,” William Masters described how, as a young boy, he brought about the death of his own parents. On purpose. Because they deserved it. When I finished reading his story, I was, needless to say, in shock. Allyson and I were planning to discuss “Survival” the following week, but we were short on time and needed to reschedule. Still, I urged her to read Masters’ piece no matter what because I didn’t want to lose it to another magazine (this has happened to us before):

We’ve received hard-to-believe stories before, like Karra Shimabukuro’s narrative about her infamous Stradivarious-stealing step-grandfather, a bad man who met a bad end. But Karra knew her story was hard to believe, which is why her submission was accompanied with numerous newspaper clippings and personal photographs, documentation that backed up her almost unbelievable story. Indeed, many of our stories are constructed around their sources, like Shari Barnett’s “Meeting Frank,” a delightful tale of video games and aging crooners centered on a black and white photograph of an early 80s Pac Man costume, or Melissa Lenos’ “The Box,” which may or may not be about a super-spy Nana. Masters’ story was, without a doubt, the most salacious story we’d ever received and although he offered us no documentation to back up his claims, my excitement blinded me to the possibility that the author might be lying.

Yes, I was excited. But Allyson had her doubts.

Indeed, I did. First, I was not as enthusiastic about the prose as Amanda was. Second, this story was nothing like our other forays into the underworld. Sure, we’ve covered ambiguously dead roommates, dead cats like Blacky and Roogie, but dead parents? And not just dead dead parents, but murdered dead parents!

So, I purchased an account on some online family search website and scoured all California obituaries that I could find: 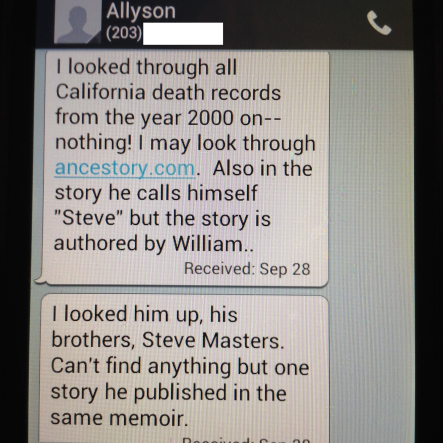 So, I suppose it could really happen, a boy, a teen — like the ones I stand before 5 days a week — deciding enough is enough. Perhaps an auto shop class under his belt, some under-sized wise ass whose fists were no match for his father’s. He took a gamble, maybe the innocent suggestion of some teacher trying to bring him out out his shell: “Take some risks, William. Go ahead.”

Or maybe brake fluid is something all boys of a certain generation know about draining?

Or maybe all of it was just a lie…

For what gain? While we work hard generating readership on Tell Us a Story, we’re still very much the new kids on the block. Why send such a story to us, where maybe a few hundred people might see it? We certainly don’t offer payment to our contributors. 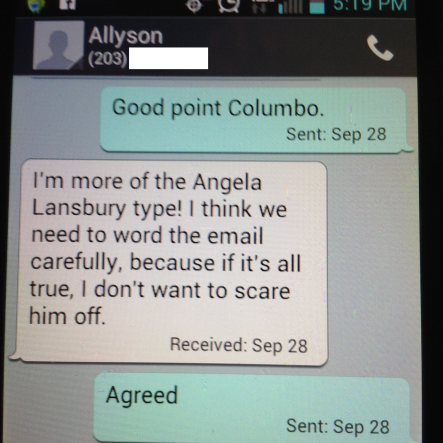 Yes, my Angela Lansbury was suspicious, but me? I wasn’t ready to give up on the dream of publishing Masters’ story. Allyson and I continued to discuss it whenever we had our editorial meetings:

We finally decided to accept the piece, but to ask the author for verifying documents:

Of course, Masters’ continued evasiveness complicated our plans to publish his story. We kept putting it off, week after week.

While Allyson pondered calling the police, I went ahead and consulted my most trusted source: Twitter. 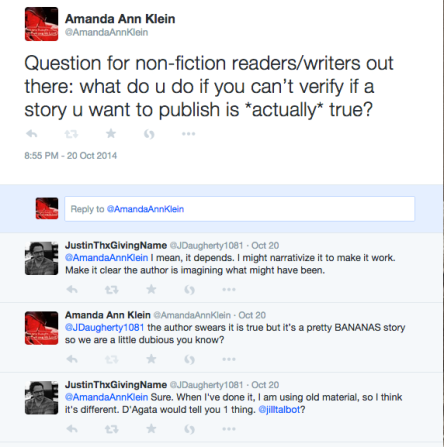 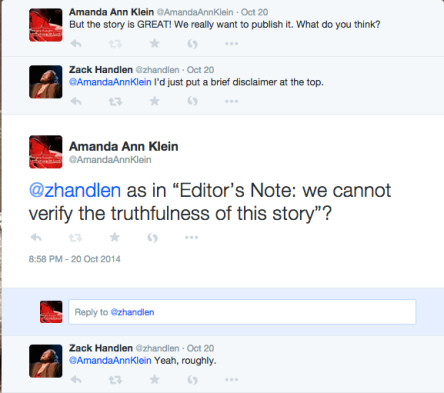 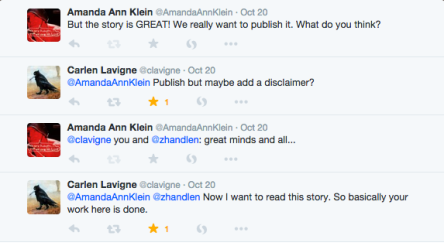 Then I reported Twitter’s useful advice back to Allyson:

So I called Detective Daniel Cunningham at the San Francisco Police Department. The more questions he asked me, the more I doubted William’s story.

I narrated William’s story, including his discrepancies and other unlikely bits: the name Steven instead of William (which appears twice in the story), the bottled water in a story that had to have happened in the early 1960s, and the eleven-year-old brother who hops a freight train and heads to the mid west. After a long pause, Detective Cunningham asks, “Is the story well-written or does it have a lot of grammar mistakes?”

As if it were impossible for a murderer to write or speak well. Still he seemed interested and asked me to send him any information or communication I had with William. I sent him follow-up communications and then waited.

And waited. . .finally getting this response:

Then we received this email from Masters:

Sure, we had our suspicions about the story’s veracity before, but to have Masters send us an email declaring that the whole thing was a lie? Well that just seemed insane. We had no idea what was going on. A few minutes later, we received this email from the author:

Clearly William had accidentally sent us an email intended for his friend. It was careless and silly of him but what really outraged us were his attempts to cover it up.

Then Allyson wrote this email to Masters (she was mad): 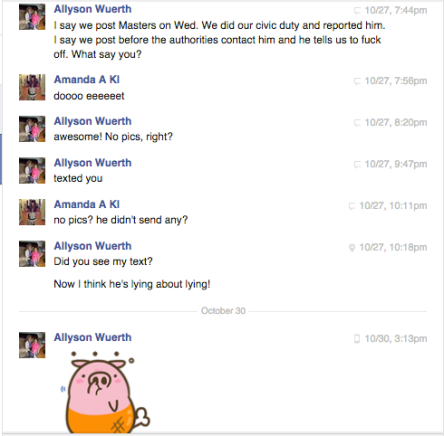 Lacking any further evidence from the author and getting nowhere with the San Francisco Police Department, Allyson suggested that we look into things we *could* verify about the story, such as the fact that Masters claimed he was given a bottle of water at the police station: 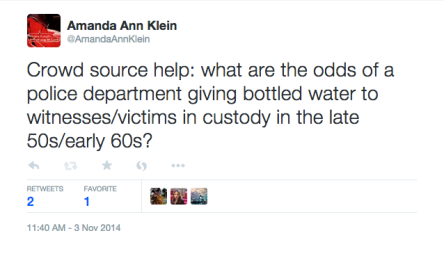 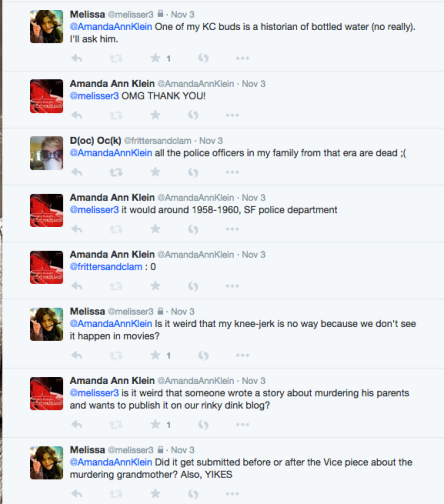 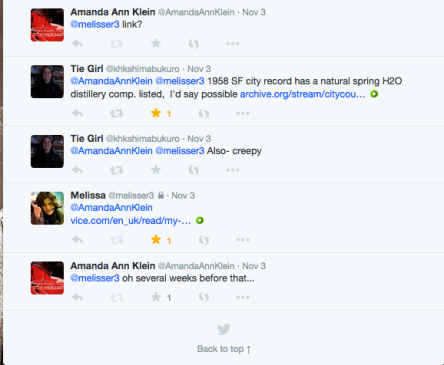 The more we emailed with William, and with our Associate editors, Coral and Brandon, the more we realized that the story we were telling was not of fictional, murderous William and his fictional, Dickensian parents. The story, rather, was about us—two frazzled working moms who were hoping to find a story that would garner some attention for their blog and who therefore invested weeks of time and energy into trying to prove the story was true before realizing that it was, ultimately, a fool’s errand. And this new story that emerged out of Masters’ lie, about what it means to try to create art when your life is filled with carpooling and dentist appointments and piles of laundry and deadlines and no goddamned raises from your broke-ass state university and bored students who call you a “bitch” when you ask them not to use their cell-phones and beg them for the love of god  to just pretend to be interested in Frankenstein, and to want so badly for that art to be seen and read and appreciated. So this story, you see, became about us. And so we decided to publish Masters’ story—not because we believed his dramatic tale, but because we didn’t.

Our preface really pissed off the author (you can read his reactions in the comments section of “Survival (Part I)”) and at that point Allyson and I had pretty much decided to drop the whole thing. We wanted to write our follow up, explaining why a true story blog would publish a piece we didn’t believe was true, but the author seemed so angry with us that a follow up just seemed like rubbing salt in the wounds. Were we telling a good story or were we just making fun of an easy target? We bagged our plans to post our follow up the next week and published several more stories. We thought that our readers had likely forgotten about our promise to post a follow up and we planned to leave it at that. But then, like a gift, Masters sent us this email just after Thanksgiving:

I, for one, still want to see those death certificates, some papery souvenir to commemorate the distance that grew between a fourteen-year-old boy and his drunken parents’ brake-less car.  And, as a mother, I need to know the truth about whether an eleven-year-old boy felt his life was so horrible that he needed to jump a freight train to nowhere. I need to know whether or not three boys were willing to run, to steal, to go to jail, to kill in order to survive the people who were supposed to love them most in this world.