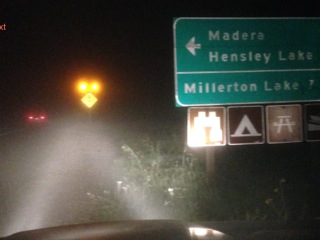 Highway 41, where the incident happened

We couldn’t figure it out – not in twenty seconds anyway. Something had flashed above the road toward our car and disappeared like a low-flying UFO nobody else saw. On Highway 41 in the foothills above Fresno on a hot September night, a dark sedan had parked on the shoulder, other side of the road, headlights off. A man and woman were standing on the highway side of the car, an underestimated danger. Years before, two teenagers changing a flat tire had been killed by a drunk driver on that very stretch. I was seventeen when my dad and I set out that Sunday after sundown to collect plankton from Millerton Lake for his high school biology class the next day. Seconds before it happened, the five-gallon aquarium was between my feet on the floor as we coasted along about 45 mph so the water wouldn’t splash much. Whatever the flying thing was, it had seemed to be aiming for our car.

“What was that?” Dad asked. We were in silent agreement that whatever it was, we’d never seen anything quite like it.

“Yeah, that was weird.” I looked back through the rear window at the too-dark road.

The atmosphere inside our Chevy Monte Carlo was now frosted with an otherworldly chill that posed the question of whether to get involved. 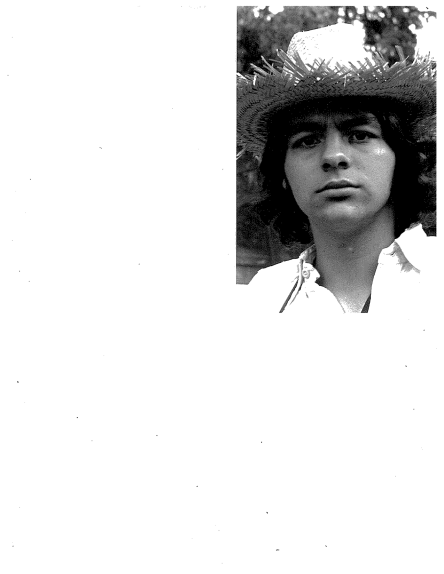 The author as a teenager

“Should we . . . turn around?” Dad asked slowly, as if hoping some logical Oh, that’s what it was would come to mind and make sense of the puzzle for us.

After holding my breath I said, “I think we should go back.”

The mind works fast but not always efficiently when faced with an unknown, especially when turbulence is in the air. Adrenaline can either save you or lead to your undoing. We cautiously headed back, drove up slowly and parked behind the sedan with our high beams on. The man and woman were now inside the vehicle. Dad, squinting hard, told me to stay behind him.

We got out of our car and approached their driver side door. With the authority of a highway patrolman he announced, “Evening folks, I’m a school teacher and just wanted to make sure everything’s alright.”

Our suspicions were answered with a shriek when a young woman bolted out of the passenger door holding something in a light blue blanket and screamed, “He tried to kill my baby! He threw my baby at a car and it landed in the road!”

My spine was now in full-blown tingle as my mind raced from solve-the-mystery to life-or-death. The young mom didn’t realize that it was our car the baby had been thrown at, and that we’d turned around.   She frantically scrambled to where she could use me as a shield against her perpetrator. Clutching the back of my shirt, scattering gravel, she pulled me backward with her toward our passenger door. Dad signaled me to get her into the car.

The smartest thing my dad did that night was resist the urge to back away. Thinking fast, he leaned into the car until he was nearly nose-to-nose with the accused, and could smell the alcohol. As a teacher, my dad knew that bullies are cowards at heart, and as a cross country coach that ran with his team every day, he still had the confidence to physically engage if necessary.

“Now Mister, we’ll be taking the little lady and the baby to the hospital. I reckon it’s better if you leave us be and head on home.”

Even though Dad was a transplanted Indiana Hoosier with a leftover drawl, he never talked quite like that. In the face of a violent situation that could have gotten worse fast, he decided to talk like a farmer in the hope that this guy, a dead ringer for Charles Manson, might come from farm folks. Dad told me later he was reasonably certain this type of guy would have a gun somewhere, and was only hoping it wasn’t under his driver’s seat. Dad had always kept a sawed-off baseball bat under his driver’s seat just in case he ever needed it, but the one time he might really need it, he’d chosen words instead. He backed away and headed for his steering wheel.

Now that the four of us were inside our car Dad started off slowly after a U-turn, gradually and deliberately speeding up. When I looked back I saw Manson’s car send dust flying as it also launched a U-turn.

Now, we were traveling along at a soothing 85. It would be about fifteen minutes before we got back to the reassuring obstacles of town traffic. Of course, my dad would have preferred to leave the troubled man in the dust but he held steady, testing his ability to gain on us. In 1970, Chevrolet general manager John Z. DeLorean introduced the first Monte Carlo. Dad had decided on the most powerful option, the SS 454 with Turbo-Jet engine, four-barrel carburetor and 360 horsepower. Earlier that summer on the way back from our Indiana vacation, driving across the Mojave Desert, he got it up to 115 “with power to spare,” he said at the time.

Just then, I looked back and saw Manson’s car swerve, skid and roll over in a spiral before tumbling to a woeful rest upside down.

Back at the scene of the mysterious flying object, when we’d first seen young mom leap from harm’s way toward us, I’d thought she was older than me, but now on closer inspection I realized she might be younger. She cuddled her baby and shook convulsively, trying to catch her breath. Her plain beauty took me by surprise; I hadn’t noticed it when she was screaming her desperate survival plea. If she had gone to my high school, I would’ve wanted to talk to her, and I couldn’t help but compare my situation with hers. Where were her parents and what was her upbringing like? How could someone my age end up in such a terrible situation? Had her father taught her how to stand up for herself? I hoped that she would never forgive her boyfriend or husband, or whoever he was that had tried to kill her baby.

When I said, “He just crashed and it looks bad,” young mom sighed a sigh that made me ponder every woman ever who has suffered under a coward.

Then she uttered her only words of our ride: “Please don’t tell my father what happened; he has a bad heart and if he finds out, it might kill him.”

At the hospital, everything slowed down. She called home on a pay phone after Dad gave her a few dimes. At the same time, he called the police to inform them of Manson’s accident.

Soon enough, she was introducing us to her father as “the kind gentleman and his son who gave me a ride.” And he surely did look like he was just a horseshoe nail away from heart failure. In his cowboy boots and hat, smelling of nicotine and hay, her father kept repeating, “I’ll kill the son-of-a-bitch.”

Finally, after a long wait, we found out that by some miracle the baby had nary a scratch or bruise. I surmised the possibility that in mid-air, having been cruelly sent flying onto Highway 41, the baby had also spiraled as the blanket enfolded him before cushioning his impact.

Outside the emergency room doors, a siren wound down and hospital commotion ensued. Emergency care workers yelled as they barged in with a gurney. I noticed Manson before she did. He was on the gurney, strapped down with bloody head bandages and a neck brace on, helpless as a newborn yet not nearly as alive. He was looking straight up, to heaven I suppose, maybe offering a plea for forgiveness, wondering what life would be like paralyzed, or thinking of all the I’m-sorry-baby-it’ll-never-happen-again-I-swear-noone-will-ever-love-you-like-I-dos he was going to trill and coo when he saw his sweet darling again.

When she laid eyes on his hapless form, a crimson wind whipped across her face. After a scornful stare that morphed to a daydream of sadness and then to the positive resolve of new found freedom, she gave a kick to the back right wheel of the gurney, the one directly under the accident victim’s karma-targeted head. Predator and prey had traded places. She stood statue-still staring down at him, saying nothing and everything.

With healthy baby safe in her arms, she exited the emergency room doors walking tall as triumph alongside her bowlegged pop under the yellow parking lot lights. I wondered what would happen to her. Had tonight altered her tomorrows and her baby’s forever, in a good way? Would she be a struggling single mom now, and would she ever be able to go to college and escape farm town America, like I was determined to do?

As her dad opened the passenger door of his old banged up pickup truck, she took a moment to lean down and kiss her tiny miracle on the lips. Then young mom looked back at the emergency entrance, took a breath, and shook her head before getting into the truck and driving off toward the unknowable future.

Colton Green is a New York-based writer, actor, teacher and coach. After a career in Broadway theatre (Kiss of the Spider Woman, Chronicle of a Death Foretold, Ragtime), film and television, Colton won the Honors Colloquium Writing Award at Marymount Manhattan College, and earned a master’s degree in English at Columbia University Teachers College. Currently, he collaborates in creation of an experimental high school in the Bronx. In his Spoken Story Workshop, Colton guides authors preparing for literary readings. Above all, Colton is the pleased-as-punch father of Curtis and Pearce.