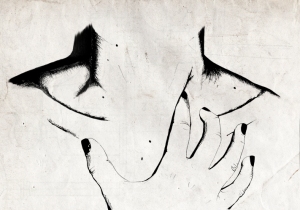 With antichrist on my left shoulder, I walk up the steps: Clank. Clank. Clank. I hold onto James’s arm harder and harder as we go up and up the stairs. He doesn’t say anything, yet I’m sure he wishes I’d be quicker. What he doesn’t know is that the last time I wore these shoes was on Halloween night in 2006, and I only had to walk for a single block. I feel like saying that out loud so that he knows, but my voice is nowhere to be found. Once we get to the door, we pause for a moment, and I can hear him take a hard, deep breath. He holds my hand that is now wet from wiping away my tears and squeezes it as I clank away to where we’re supposed to be seated.

John would laugh his ass off if he saw us like this: me in high heels, James’s big-shape squeezed inside a tuxedo and a tie. And we’d laugh with him and at him, but I’m not sure if I can remember how to right now. I sit, my hand over my mouth, getting even more wet with tears, and I stare at my knees as James keeps getting up and sitting down to greet faces I know I’ve seen before yet can’t remember the names of. I just want this whole thing to be over so I can hit the bottle. Hit it hard.

I’ve never been to a Christian funeral before, let alone a Catholic one. I don’t even know if it makes a difference. I’ve heard Catholics are more strict, and John’s mother has already scared me by asking me a million times to “dress nice” and “dress in black.” My daily color of choice is burning my skin today, screaming out loud how much I ache even though I’m by now numb to the pain. I feel more of an alien than ever as everyone seems to know what they’re doing except me. I’m expecting someone to turn around and single me out as “The Muslim,” and probably shoot me. But then I relax when I realize nobody needs another dead body today.

As I silently curse at myself for the stupid thoughts in my head, people get up. They’re holding books and singing in a language I don’t understand. I catch John’s grandmother’s eye as I look around to maybe figure out what the hell’s going on, and her pupils get bigger when she sees that I’m not singing. I stare at my knees again, for a while, and then I just move my mouth all along without making a sound. Songs sound horrible today.

The singing feels like it lasts for an eternity. Afterwards, we form a line and take turns standing in front of his coffin to say goodbye. It’s black like all the rest of us, but it’s not showing any skin. It’s not showing any skin because he’s in pieces. He’s in pieces and lying inside a box. He’s lying inside a box and not breathing. He’s not breathing and he never will, ever again. I take my hand to my lips and then put it on the coffin where I think his head is. I kiss him, “I’ll see you around.” I’m not saying goodbye. This is NOT goodbye.

James pulls my arm as my shoulders start shaking harder and my vision gets blurry. He sits me down on a chair right under Mother Mary. Is it Mother Mary? I think it is. Whoever she is, she’s smiling, and I’m mad because there is nothing to fucking smile about. I want to smash her face, but it’d be useless. I’m useless because I can’t even see straight or breathe right. I just want to get out.

Once we’re out, James asks me if I want to go to the cemetery. He gives me a crooked smile when I say, “Hell, no.” He offers to drop me off at Times Square, which is where I think I’m going, but I refuse since it already took us twenty minutes to drive for a block earlier this morning. He drops me off at the train station, which is near, and squeezes me tight before I clank away into the crowd.

I call Pat as soon as I get to Times Square. There are people all around, all rushing to god knows where, and I feel like they start walking faster when they see me just to run me over and be done with it. Pat asks me why I’m at Times Square. I say, where else I’m supposed to be. Union Square, he says, and I start cursing at myself yet again for being so fucking stupid. He assures me that it’s no problem and tells me to just walk around until he gets there. I say okay, but I can’t walk anymore in these shoes.

I walk into Starbucks and take the shoes off as I balance myself while holding onto a table where two girls are chowing down their Frappuccinos. They raise their eyebrows at me, staring at my bare feet, but they turn around quickly when I hiss in return. I open my carry-on suitcase and take out my sneakers. I walk outside to put them on because I feel like one of the employees will ask me to leave if I don’t, the cause being my shoe-changing right in the middle of the place and crying all along.

I walk outside. I breathe in, I breathe out. Kids’ laughter and people’s voices burn my lungs. My dad calls. Who the hell told him? Then my mom calls. I also talk to my sister. Then I find out dad had no clue as to what was going on when he called. I guess he just felt like calling, wanted to see how I’m doing. Right after that thought I realize I’m so desperate that I’m even thinking about the fact that my dad decided to care. I laugh in between sobs, and it hurts my stomach.

Pat agrees to take a nap once we get to his apartment in Brooklyn. First, he puts on Chicago, then he gives me a fat-ass glass full of some Scandinavian whiskey I can’t pronounce the name of. I tell him whiskey makes me sick. And he assures me that this one won’t because it’s “the best.” I take sip after sip after sip and it’s sweet and smooth and it burns and it doesn’t hurt that bad when it burns and by the time I see the bottom of the glass, my eyes are starting to shut.

We go out when we wake up. He tells me it’s okay if I want to stay home. I tell him I don’t because then I’ll be thinking, and thinking is the most dangerous of all right now since my mind won’t listen to me and focus on John and the fact that he’s gone; gone for good, gone forever.

He makes me drink some more of “the best” whiskey before we go out.

We go to a Turkish restaurant where the waiters don’t believe I’m Turkish and keep telling me I don’t even have an accent. I show them my passport to prove to them that I am indeed Turkish. Wow, they say and then talk some more, but I’m too tired to listen.

We then go to this Turkish/Arabic café where we share a hookah and get more drinks. I go on a crying frenzy once in a while, and Pat just shoves my head under his arm, squeezes me tight and gets me another drink. I drink and I cry. I cry and I talk to strangers. I talk to strangers and I want to smash each one of their smiling faces. But I don’t. Because it’s useless. Because he’s so far gone that nothing can bring him back.

We have cheesecakes before we go back to his place, and I fall asleep on his chest.

“To die would be an awfully great adventure,” right, Peter?

Simay Yildiz is a nine-to-five-PR-girl, writer, bibliophile, librocubicularist, pluviophile, crafter and future crazy cat lady who’s prone to randomly bursting into song. She has a book blog (in Turkish) at www.zimlicious.com