The first time it happened it was your fault. You had been at a summer party that night and got carried away with a bottle of Jack until it carried you away. You don’t remember staggering sideways to your truck but you did and you drove home or at least towards home.

When everything shuddered, you awoke. There was a semi-truck with its blinking brake lights and your blue Chevy wedged under it. Through slitted eyes, you saw in your blue cab broken glass and blood. To a man screaming at you. Then the flashing reds of a cop car.

You stumbled from your door and fell and the cop ordered you to stay down. You tried to stand anyway. Don’t fucking get up, he said. You thought he was wearing sunglasses but that couldn’t be right because it was still dark outside. You said something to him and even you knew it was gibberish. Don’t fucking move, he said and crossed over to the older man with the gray beard and red flannel shirt standing next to his semi.

You surveyed your truck and noticed how the front was compacted, bent and jagged-sharded like you sharpened it in your sleep. You noticed blood soaking your jeans and you knew it was your blood and you were disappointed that you had ruined your new jeans. That blood would never wash out.

The cop told you that you were lucky to live. That you bounced off the front tire of the semi and that a second or two later you would have driven under the trailer, which would not have left any room for your head. Woulda killed you straight out, he said. He was bent at the knees, his left hand holding onto your flat truck tire, twisted because of the bent axle, for support as he talked to you as you sat there with your back against your truck door or what was left of it. The ambulance is coming, he said.

None of this was making much sense to you and you threw up a brutal puddle of dark liquid on yourself. The cop stood up, the lights of his car still flashing like they were calling your name. The cop shook his head and said, Boy, you just fucked yourself. And he was right.

The second time it happened it was a few years later. You were driving the same truck. The insurance company hadn’t totaled it. This time you were on a two-lane road coming home from a work party. After the restaurant closed, the head chef had made dinner, mushroom risotto and salmon, for the staff, serving the perfect bottles of wine to go with the meal while you all talked about your lives and where they were going. For most of the ride home, you didn’t see another car on the road. But almost getting there you found headlights coming at you. You thought it was maybe the curve of the road since you didn’t know this way too well but then you realized, almost too late, that the oncoming car was in your lane. This time you didn’t pass out. You sat there, breathless, hands strangling the steering wheel, glass and metal exploding in slow motion around you, the truck spinning and spinning and spinning until you ended up sideways in a roadside ditch. Broken glass, blood, you’d been there before. The other car, it was orange and black, kept going. Don’t know how but it did.

The cop who arrived on the scene carried you out of your truck and sat you on the side of the road. Besides being banged up, you were okay. His radio kicked up. They’d found the other car. It didn’t make it too far down the road. The driver was drunk but still alive. Later, before the court appearance, you found out that the driver had fled the country.

The cop looked at your truck and said another few seconds and the other car would’ve hit you head on, you’d be dead.

You started laughing. He didn’t understand why but you did. He checked to see if you were sober. You were because you had lived through a few seconds before. 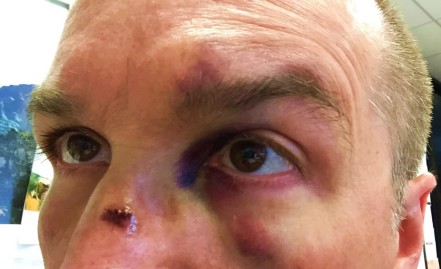 The author and his broken face.

Ron Burch’s short stories have been published  in Mississippi Review, Cheap Pop, Pank and others. He’s been nominated for a Pushcart, and his first novel “Bliss Inc.” was published by BlazeVOX Books. He’s currently working on his MFA in Creative Writing at Antioch University. Please visit:  www.ronburch.com.