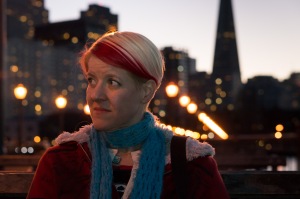 It was me, Terri,
my best friend Binky,
and whatever guy she was dating at the time.
I think it was Chad.
On a nondescript summer evening
We loafed about our
sleepy midwestern college town, where
nothing ever happens around here,
GOD!
Someday we were all going to
get the hell out of this place, but
tonight
we were sixteen years old
and there was nothing to do.
Chad, let’s call him Chad,
wanted to impress us all
with his urban exploration skills, so he said,
You want to see something cool?
He took us around back of the Ideal Diner,
where they’d kicked us out for cramming
eight teenagers in a booth every day after school to
split a single basket of fries and make a
general nuisance of ourselves.

It was really dark back there.
The weed colony
obscured a vast collection of
furniture skeletal remains and
unidentifiable rusty objects.
Chad scaled a drain pipe on the back of the building like
a monkey
or Spiderman
or Evel Knievel,
and we three girls looked at each other
in doubt and trepidation
and dare.
I’ve never been too good with heights,
but I’ve always considered myself
macho
Binky,  the girlfriend,
had to go first.
That’s just how it was done.
I followed her with false courage,
Terri brought up the rear.

At the top, Chad beckoned us to follow as he
slid across a narrow ledge that ran
along the brick wall that lined
a seemingly bottomless courtyard that came
between us and the rooftop
where Chad now stood.
He’d done it so fast
like a tightrope walker or
a monkey.
But we were teenage girls, not gymnasts,
so we lined ourselves up holding hands,
me in the middle,
our backs to the wall,
facing the bottomless courtyard
from which grew an elm tree
not three feet in front of us.
We sidled along this tiny ledge,
just a few inches wide,
our toes hanging over abyss
very
very
slowly.
There was nothing to hold onto,
but two hands.
I pictured plunging into the darkness onto
rusty shapes or dining room chairs
or whatever lay below,
so that’s what I did.

I tipped,
unable to stop,
ever slowly forward,
watching myself tumble to unknown.
At the last moment before my feet lost their purchase,
I grabbed the tree.
There was no coming back from this,
no reverse momentum I could imagine.
I hung at a 45 degree angle from the wall,
feet gripping the ledge,
hands clutching feeble branches,
Binky, whom I’d inadvertently pulled along with me,
hanging from my arm over the chasm.
As I accepted that she would surely soon fall to her death,
and I might be able to swing out to the tree,
but I’d most likely fail, she said,
Hey, there’s another ledge down here.

It was not twelve inches below us;
a good couple of feet wide.
You could walk it leisurely facing forward,
for chrissakes.
She let go of my arm,
just
standing there,
and I dropped down easily,
death faced and overcome.
Chad, when challenged,
admitted he knew about the other ledge, but
That one’s not as fun.

When we reached him,
I choked him to death.
Or at least I pretended to.

And we all looked out over the cornice
of the Ideal Diner,
two floors above the street
at the cars below.

There wasn’t really much to do after that.
We didn’t stay up there long.

Thadra Sheridan is a writer and performer from Minneapolis, MN.  Her work has appeared in Rattle, The Legendary, Specter, Blotterature, The Pine Hills Review, Abyss & Apex, on Upworthy, HBO’s Def Poetry Jam, Button Poetry, and in several anthologies.  She is a recipient of the Jerome Foundation’s Verve Grant for Spoken Word and a past weekly columnist for Opine Season.  She reads her live stories regularly at live storytelling shows nationwide such as The Moth in St. Paul, MN and Story Showdown in Oakland, CA.