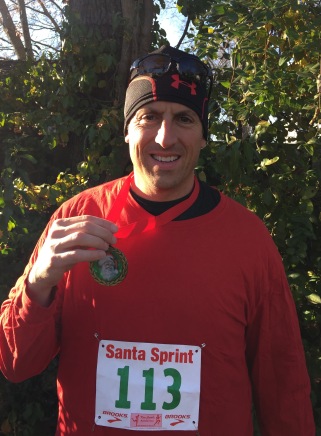 The author at the finish line with his Santa Sprint medal

It was the first Saturday in December and the annual Santa Sprint, a 5K run to benefit a local ministry. The Olympic Trials it was not. It was a fun-run. It was a fun run – people dressed in red and green, wore festive caps, jingle bells, some brought their dogs nattily attired in plaid sweaters, and dashed, or strolled, down Frankfort Avenue and back before the road was reopened to traffic to release the barrage of Christmas shoppers.

I had run this race before. It was a holiday tradition for me. But unlike the guy who was doing high knee kicks before the start in only a singlet and teeny-tiny shorts despite temperatures hovering around freezing and a threat of snow, I had no aspirations for a podium finish. I was merely out for an easy run, and to maybe do some Christmas shopping myself afterwards.

The race went off as scheduled, sort of, at nine-ish, and after weaving through flocks of hyperactive youngsters bursting forth in every direction, and harried parents pushing oversized strollers, and groups of walkers three or four wide, I settled into a comfortable pace and proceeded on past coffee shops and boutiques and that one bakery that had the flaky croissants.

About fifty yards from the finish line, as the course veered into the middle school parking lot where we had begun, I heard heavy breathing behind me. I glanced over my shoulder and there was a young girl, not older than thirteen I would later learn, quickly gaining ground. I had a niece about her age just getting into running whom I encouraged to keep at it. I immediately got the brilliant idea to do the same for this girl, to ease up and allow her the satisfaction of passing a seasoned runner like myself. It was, after all, a fun-run, and the holidays. And truth be told, I was about out of steam at that point anyway.

As we approached the turn, I noticed a woman up ahead, standing off to the side, hollering and carrying on more than anyone else among the scattering of frigid spectators, no doubt the girl’s mother. Perfect, I thought, my opportunity to do an especially good deed by allowing her to watch her daughter outdistance me, and I would really play it up, feign to struggle to hold my position.

We got nearer to the woman, and her exuberance peaked to a crescendo. She began gesticulating wildly, her entire body shaking, her voice shrill and blaring. “Go on, so-and-so,” she yelled out to the girl, whose name I didn’t catch as I was not paying particular attention to what the woman was saying, not until she completed her sentence, “you can beat this old man!”

Wait, what? What was that? What did she say? Everything about me – my pride, my ego, my sense of worth – deflated like a Mylar balloon squashed by Santa’s sleigh. Had she just called me an old man? I did a double take to check if someone else had come upon us, some legitimately old man, perhaps Jolly Old Saint Nick himself. But it was still only me and the girl. Granted, among the participants – lots of children, and high school- and college-age kids, not to mention the babies in strollers – I skewed toward the adult end of the scale, yet I was by no means an old man.

I stared at the woman, directly, intently, for any indication, no matter how subtle, that her comment had been in jest, a joke that had fallen terribly flat, for some hint of irony, a twinkle in her eyes, an upturn to her mouth, a grin, a dimple. Something, anything. I was willing to give her the benefit of the doubt. It was the blasted holidays after all, and the Santa Sprint for heaven’s sake. But nothing. She meant it, she obviously meant it. That woman had just called me an old man – and she meant it.

Before I responded, and I had a few zingers, I caught myself, remembering that there was a young girl running next to me, and doing her best, and this was her mom – no matter how impolite. I resolved to take the high road, and simply said, incredulous, “Really?” which made the brash expression on the woman’s face drain blank, and offered her a terse “Merry Christmas.” She repeated “Merry Christmas” back to me, sheepishly, devoid of her prior vitriol, and I could tell that in her Grinch-size heart she felt slightly not right with what she had said about me. Nonetheless, undaunted, she continued to root on her daughter, “Looking good, honey, keep going!” – to which I replied, “Thanks.”

What followed was not my finest moment, but I had to do what I had to do or be eternally instilled with the moniker of “old man,” and what I did was to abandon any noble notion of letting this girl pass me in front of her insufferable mother. I instead shifted into another gear, and in the true name of the race, I sprinted away, running as hard and as fast as I could. I ran like there was no tomorrow. I ran like my life depended on it, like I was being pursued by a pack of rabid reindeer. I ran with everything I had left, ignoring the pleas from my body to take it easy and coast in since it was, after all, just a fun-run.

I ran with the will and the desire and the singular determination to not allow this girl to beat me, to not even come anywhere close to beating me. And she didn’t. Not only did I soundly leave her in my wake, I sped by several other runners I had theretofore been content with allowing to finish ahead of me, the timing clock proclaiming in bright red numbers that I had shattered all of my previous 5K records. I could not say that I was entirely pleased with myself for my convincing defeat of that young girl down the homestretch of the annual Santa Sprint – but I was.

At the awards ceremony, the girl came in first in the girls’ thirteen-and-under division, while I placed third in the men’s 40-49 age group. It was a win for both of us. It was a win for old men everywhere. And the tin Santa Clause medal I received for my efforts would forever be a fixture on my Christmas tree.

Peter Stavros earned a BA in English from Duke University, and studied creative writing on a graduate level at Emerson College and Harvard University. His work has appeared in The Courier-Journal, Literary LEO, Hippocampus Magazine, Fiction Southeast and Juked, among others. He lives in Louisville, Kentucky with his wife.