The author and Zach, standing outside of the hut.

It was late morning by the time we noticed the rabbit. The sun was hanging high in the sky, almost oppressively orange and bright, beating its cheer down upon the dirt road behind the hut. The dust of the road hung just above where our feet were planted, where the tires of his car were parked, as if the sun had been urging it upwards all morning while we slept and cooked and cleaned and yawned inside the hut, hiding in the cool, clean shadows of our home and running to the dock to dip our feet, calves, thighs in the water. The flat, shallow water of Flagstaff Lake looked inviting even on the most crisp of these late summer days, perhaps even more so as the leaves bordering the water turned, exposing their brilliant reds and oranges, changing the lake into a landscape we felt obliged to take full advantage of.

We had just finished cleaning up from the breakfast we had cooked for our overnight guests at the hut where we both worked and lived, Zach and I, for the summer and fall. It was a Monday, the day Zach was to leave for his days off, and I was envying his imminent freedom and mobility, eyeing his Saturn sedan that was parked—although our boss would have disapproved—just behind the huts. He was leaving me alone, in charge of whatever guests might stumble in from the heat, for the rest of the day, as our other coworker was out on the trail with the unwieldy machine, the Morooka, that we used to carry the dry and splintering firewood that we would soon spend days splitting and stacking and chopping and moving and splitting and stacking.

The rabbit was lying on the dusty path, just behind the wheels of Zach’s car, and it was not moving. Its eye was open, roaming, a scared and helpless glimmer flashing each time we moved nearer to it.

“What’s wrong with it?” I asked, hoping Zach would have the answer. As I knelt down to see if it was injured, it gave a great, frantic kick with all four of its legs, peddling them sideways against the ground as it lay on its side.

We puzzled over the rabbit, poking it, prodding it with sticks, our fingers, to see if we could diagnose it. The thing was tiny, not fully grown, one of the many wild rabbits that wandered into the fields behind our hut, walked into our summer home, to eat our clover and be scared off by the yapping dogs our guests brought with them. Ten minutes passed, then twenty, and the thing was still lying on the ground, kicking its legs and looking at us with a glare in its glassy eyes.

We tossed around various ideas of what could be wrong with the rabbit. I believed it had a spinal injury, due to the way it was moving on the dust, kicking only its legs and unable to stand up, but clearly conscious. Zach thought it was drunk; I guess he saw it move in the same way he had seen some friends move, their limbs flapping, eyes glazed, unable to communicate or interact.

“How does a rabbit get drunk?”

“It eats rotten, decaying berries.” Zach replied as if I was an idiot. Doesn’t everyone know how rabbits get drunk?

We know we need to kill it. We arrive at this conclusion almost as if we had always known; we don’t discuss it or propose an alternative. The rabbit is dying. We still haven’t determined what is wrong with it, but its kicking is coming less and less frequently, and there seems to be something about it that is fading, giving up; even the fear is leaving its eyes. Our next question is how. It is a tiny creature, easy to “take care of,” as the hit man always says in mobster movies, but it’s too cute for us to fathom doing anything gruesome. Zach is getting impatient; his days off have started, it is hot out, and he is ready to leave. He argues that it is crueler for us to leave the thing there in pain than for us to get rid of it as quickly as possible. He proposes we shoot it.

The author and Zach inside the hut.

Inside the clean hut, just inside the door that connects our cozy and cool staff quarters to the porch where our firewood is stacked higher than our heads, we survey our options. Stacked neatly on a long bookshelf, near the bottom, are two guns. Both belong to Chris; Zach and I hardly know how to handle or manage a gun, sure only of the basics, of how we held one once in a friend’s backyard or how we saw them do it on TV. The first option is a rifle; this is what Chris takes with him when he wakes up at 4:45 in the mornings, pulls on his boots and walks through the still-wet fields and woods, returning before breakfast with a squirrel or a duck. We take the rifle outside, to where the rabbit has not moved, making tracks with its kicking legs in the dust. Zach, first, carrying the gun, shoves its long barrel toward the head of the rabbit. The rabbit shows no change. To it, the barrel of the gun is no more menacing than our outstretched arms. He closes his eyes, finger on the trigger.

“Don’t close your eyes!” Shooting a hunting rifle with your eyes closed seems like a stupid thing to do.

The mess this rifle shot will make suddenly seems apparent to us. A rifle is too large, this rabbit too small; and then what? The rabbit doesn’t go away once we shoot it. It just gets, for lack of a better phrase, spread out on the path: an even bigger mess to deal with. How would we take care of that? How would we hide it from the guests? That would be a mess—unlike the ones made daily by Zach and I and the children that run through the hut, muddy footprints on our slate floors, flour all over our aprons and the counters—that I would not know how to take care of.

We fetch the other option, a BB gun with which Zach, Chris and I have been shooting at cans behind the hut in our spare time, practicing our aim. The cans, when hit, make a fantastically loud and dramatic noise, as if real damage has been done. They pop and crumple, a satisfying crinkle of soft metal.

We, again, take turns holding the gun to the head of the creature, each closing our eyes and picturing what will happen when our fingers, shaking on the trigger, jerk backwards; what will be achieved. Just as we determined the rifle to be too much force, we wonder if the BB gun would complete our purpose at all. Would a BB, fired point-blank, even kill a baby rabbit? How much force does a BB gun exert? We definitely have no idea.

Instead of shooting the metal pellets at the rabbit, we shoot at the trunk of a tree a few feet away, both to stall, waste time, shoot the shit in this uncomfortable situation, and to test the strength of the gun. When we shoot it at the trunk, a mark is made, a piece of bark falls off. But what would happen to the skull of the rabbit? I am reminded of the time I found, with my childhood friend Hannah, a small animal skull in the woods behind our house. It was perfectly clean and intact, despite the creature having clearly been dead for some time, but when we picked it up and began to examine it, bits of bone began to break off. If those pieces could shatter so easily under our small fingers, wouldn’t the same effect be achieved with the BB gun? Wouldn’t it do its job? Or were our calloused fingers not careful or caring enough to know how not to break bones? 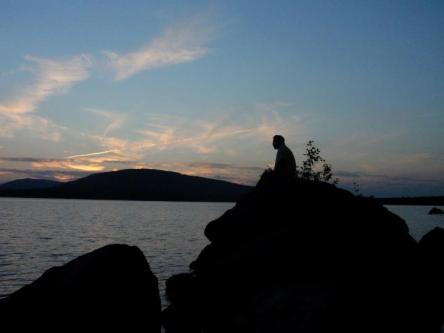 Zach seated at his favorite spot.

Later in the day I am sitting alone in the hut. Zach has left, giving up on the animal and its life or death, and I have all day been alone, baking bread and reading, and entertaining the single family of hikers and dogs that has passed through for half an hour. This is how my days this summer are filled; swift movements from kneading to baking, to sweeping, then picking up my banjo, putting it down, and in the evening, with a glass of wine, cooking dinner for the ten or twenty tired hikers we will entertain. The cooking and cleaning has become, in the months I’ve been living at the hut, almost instinctual. My motions have become easy and fluid, and my movements in the kitchen seem to be inherent, etched into my muscle memory.

Every hour or two I have been out to check on the rabbit. We left it where we had found it, discovering that neither of us had the courage to shoot it. Each time I check, it is laying in the same spot, or perhaps having moved a few inches as a result of its kicking, still laying on its side, its white fur becoming dirtier each time I look. Now, though, the sun is setting and I have not been out to check on it for a couple of hours, since the family passed through. Each time I look, I am hoping to find it already dead. I am hoping that the day would do what we could not, and that none of the images we held in our mind as we closed our eyes and held the gun, imagining what would come next, would be real when we looked. I am hoping someone else dealt with it, because I couldn’t.

I decide to check on the rabbit one more time before it is too dark to see. I walk across the field, wondering if tonight, the first night I have felt a genuine chill at being outside, it might frost. I hope that the children—the little girls, three and six—did not see the dying rabbit outside. I hope they did not sense our cowardice, know that we had held guns and not shot them, and then retreated back into the hut to entertain the guests with smiles.

When I reach the place where the rabbit had been, I find only dust, footprints, mine, Zach’s, a dog’s, but no rabbit. I check the bushes and brush around the path, to see if it kicked itself elsewhere. I cannot see it anywhere. I listen for its frantic kicks, its eager glassy eye movements, but do not see or hear anything. The rabbit is gone. I look down at the dog prints, remembering the two grown black labs that ran over our trails and across our field in the afternoon. I had let them do it, had not stopped them. They had undoubtedly snatched it up easily and smoothly, a swift opening and closing of the jaws; it was, of course, what canines were made to do. They left no mess to clean. I went inside alone, sheltered in my room and comforted by the steady certainty of the ordered night within the hut.

Harper Burke is a writer, reader and avid consumer of anything in the written form living in Portland, ME. Harper was bred, born, raised and educated in rural central Maine, and now lives in Portland – the big city – with her partner.